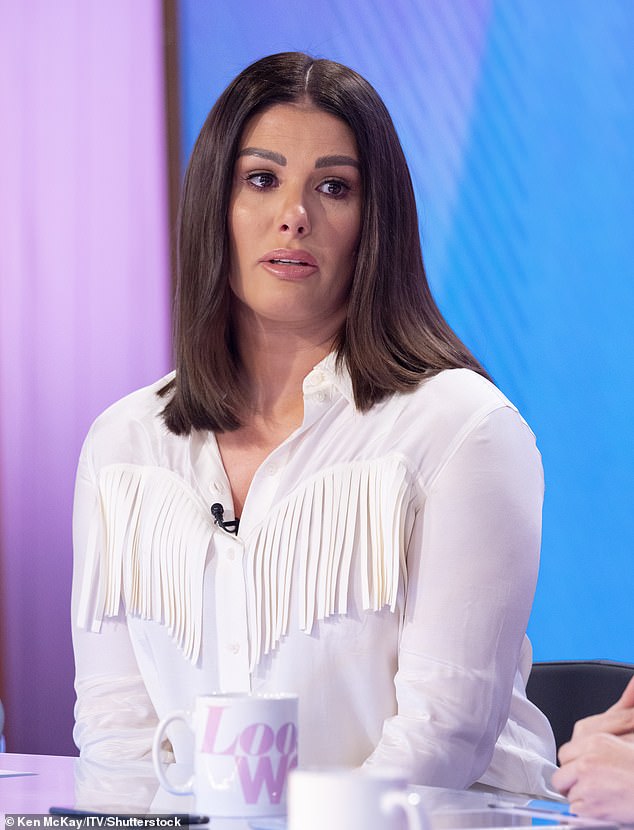 As the so-called Wagatha Christie row continues, it has now been claimed that former model Danielle compared Leicester City footballer Jamie Vardy’s wife to a rodent in a secret message to Coleen Rooney.

The slur was allegedly sent in response to a message posted on Coleen’s private Instagram account, shortly before she named Rebekah as ‘the mole leaking stories to the press.’

As reported by The Sun, Danielle texted: ‘She is rat feel ashamed for her.’

The paper notes that Coleen wrote on her private social media account: ‘I’ve finally cracked it and know exactly who’s (sic) account it is!’

Real Housewives of Cheshire star Magali Gorre also allegedly replied to Coleen’s message, saying: ‘What will her husband and family see her now – it’s shocking to me.’

The paper reports the ‘messages were contained in court papers submitted to the High Court this week’.

MailOnline has reached out to representatives for Danielle, Rebekah and Coleen for comment.

Texts: It has now been revealed Danielle, 38, compared Rebekah, 39, to a rodent in a secret message to Coleen Rooney (Danielle and Coleen pictured in 2014)

According to The Sun, court papers also reveal it was not Coleen who posted the now-infamous message accusing Rebekah of leaking stories to the press, but Coleen’s brother Joe McLoughlin.

Coleen is reported to have passed on a pre-written message to her sibling on the morning of October 9.

Rebekah is currently suing Coleen for libel at the High Court after Coleen accused her of leaking ‘false stories’ about the Rooneys in October 2019, following a social media ‘sting operation.’ Rebekah denies the accusations.

Danielle was said to be ‘furious’ after being dragged into the ‘Wagatha Christie’ court battle, MailOnline revealed in December 2020.

But a source close to Danielle said she was ‘angry’ and ‘hurt’ that Rebekah, identified her in legal papers submitted to the High Court that month – and is supporting her ‘friend’ Coleen in their libel row.

Her lawyer Tony Nelson told MailOnline at the time: ‘Danielle does not want anything to do with this, she does not want to be dragged into the matter.

‘She’s got four young children and more important things to concentrate on. She’s not surprised that she’s been dragged into this but she doesn’t want to play any part in it. Danielle fully supports her friend Coleen.’

The message that started it all: Mrs Rooney wrote on Instagram and Twitter: ‘I have saved and screenshotted all the original stories which clearly show just one person has viewed them. It’s ……………. Rebekah Vardy’s account’

Vardy did not suggest that either Danielle, ex-wife of Spurs star Jamie O’Hara, and Dawn, married to former footballer Ashley Ward, were behind the leaks, and claimed she has no idea who it was and hinting the leak might lie closer to home with an associate of Coleen or her husband, former Manchester United and England captain Wayne Rooney.

The Leicester City WAG’s lawyers claimed this as ‘obvious’ proof that Coleen knew Rebekah was having a baby when she told millions of Instagram followers in October 2019 that she believed Rebekah was leaking stories about her to the press. This opened her up to ‘extreme abuse’, the legal papers say.

The dispute between Coleen and Rebekah, wife of former England star Jamie Vardy began in October 2019.

Coleen claimed fake stories she posted about herself and her family were leaked after only being seen by Vardy’s Instagram account.

Coleen, a mother of four boys, had written of how she set a trap to discover who she thought had been leaking stories to The Sun.

She made up a series of bogus posts on her private Instagram account to see if their content appeared in the tabloid, and said she blocked out all her followers from seeing them – except Rebekah’s account.

The fake posts included stories about Coleen resuming her television career, going to Mexico for gender selection of a child, and a flood in the basement of her new home.

But Ms Vardy’s legal team say the private Instagram account was accessible to 367 others, including friends, journalists and gossip column writers.

Not her: Ms Vardy’s legal team say the private Instagram account was accessible to 367 others, including friends, journalists and gossip column writers