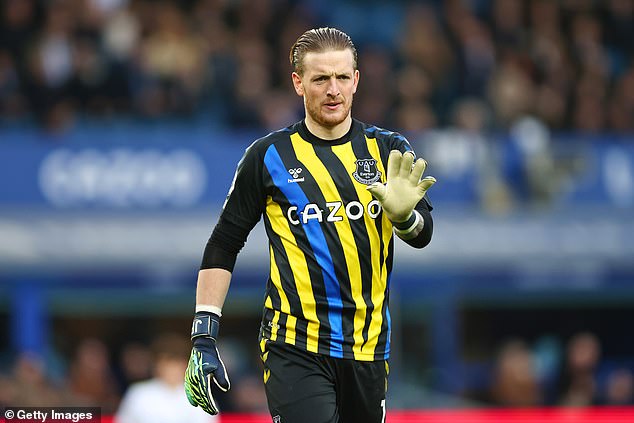 
England’s No 1 goalkeeper Jordan Pickford is reportedly at the centre of a police probe after a mass brawl broke out at a pub in South Tyneside on Sunday.

Pickford, 27, was mocked for his ‘little arms’ and with friends ‘furious’, a fracas broke out in East Boldon, with one man left with a broken nose and another with a smashed phone after he was filming the incident.

The police are investigating and seeking witnesses but, as detailed in The Sun’s report on the incident, there is no suggestion that the Everton goalkeeper assaulted anyone.

The report details a witness saying: ‘He was getting goaded, like they do. All I heard was “little arm” and then that’s it. It kicked off. It happened as soon as they walked in.

‘They hadn’t even had time to get a drink. One lad suffered a broken nose.

‘Pickford wasn’t hurt at all. He was out of the door as soon as it kicked off. Pickford’s group left by minibus before the police came.’

Pickford, 27, was present as a mass brawl broke out at a pub in South Tyneside on Sunday

So far, no arrests have reportedly been made.

A Northumbria Police spokesman said: ‘We received a report of a disturbance at the Beggar’s Bridge pub.

‘It was reported that a fight broke out between two groups of males inside the premises. An investigation is ongoing. Anyone with information is asked to contact police.’

Everton declined to comment when approached by The Sun.

Pickford was recently teased by Newcastle fans, during a 3-1 defeat at St James’ Park last week.

One Magpies fan held up a toy Tyrannosaurus Rex in a direct dig at Pickford, who is from rivals Sunderland and used to play for the Black Cats.

Pickford is famous for his heroics at both the 2018 World Cup and Euro 2020, but he has had his moments to forget in an Everton shirt.

One such moment was conceding a last-minute goal to Liverpool when he failed to deal with the ball around his cross-bar, leading to more taunts about his height and arm length.