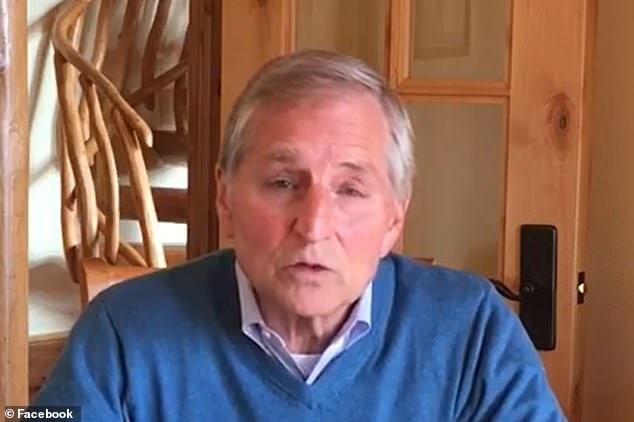 Racicot, a former Republican governor of Montana, published the letter Sunday in the Billings Gazette, and advised McDaniel to withdraw and dismiss the censure resolution, which was passed by RNC members earlier htis month during the party’s winter meeting in Salt Lake City, Utah.

Reps. Adam Kinzinger (left) and Liz Cheney (right) were censured by the RNC’s membership at the party’s winter meeting earlier this month in Salt Lake City, Utah. The censure document blasted the duo for participating in the Democrat-led January 6 House select committee

Racicot suggested to RNC Chairwoman Ronna Romney McDaniel (pictured) that she withdraw and dismiss the censure resolution, which he said could backfire and hurt the GOP’s prospects in the 2022 midterms

‘Based on my decades of engagement in Republican politics, my intuition tells me that you and the other members of the RNC will come to regret, if you don’t already, the passage of the RNC Resolution,’ he said.

Racicot went through the language of both the House resolution setting up the January 6 select committee and the language used to censure Kinzinger and Cheney, the only two Republicans taking part in the 1/6 investigation.

The censure resolution states that Kinzinger and Cheney’s involvement in the committee could help Democrats stay in the majority through 2022.

It also said that Cheney and Kinzinger are ‘participating in a Democrat-led persecution of ordinary citizens engaged in legitimate political discourse.’

That phrasing – despite McDaniel saying it was meant to reference those swept up in the 1/6 probe that weren’t at the Capitol that day – has led to criticism from members of both political parties.

‘It appears possible, and maybe even probably, that the RNC resolution, with its incendiary language and histrionics, has advanced the very threat that you accuse Representatives Cheney and Kinzinger of creating, namely the diminution of the chances for Republican electoral success in 2022,’ Racicot pointed out.

Racicot criticized the party for forgetting the ‘the Great Middle,’ which he said is ‘in the process of organizing itself with a higher goal,’ which is a ‘return to simple, timeless and enduring values.’

‘In the Republican National Committee’s search for power for its own sake and its obsession with winning at any cost, you have sacrificed, by your proclamation and its revelation of the presently existing soul of the party, the allegiance of a great many, and a growing number, of your most ardent and long-time supporters,’ Racicot warned.

Racicot also called out the RNC for suggesting Cheney and Kinzinger’s actions were an effort to hurt former President Donald Trump.

‘All of the above is to say that I have discovered no facts nor evidence, anywhere, of the “sabotage” or “persecution” or efforts to “destroy” the former president that serve as the basis for the accusations cited in the RNC Resolution and lodged against Representatives Cheney and Kinzinger,’ he wrote.

‘Quite the opposite, the evidence reveals two Republican members of the House of Representatives honorably performing their investigative duties and searching for the truth as members of a duly constituted investigative committee,’ he continued. ‘In other words, they’re doing their job with fidelity and loyalty to the Constitution.’

Racicot said the House Republican leadership made the ‘wrong decision’ in refusing to participate in the House select committee.

‘Now, having forfeited their opportunity to provide input into the Select Committee’s work and deliberations, they are left with only one available option, namely, to close their eyes to the truth and curse the darkness,’ he wrote.

Racicot also poured water on Trump’s bogus claims that he lost the election due to widespread fraud.

‘Although it is ever so neat and tidy to blame the defeat of the former president on the existence of decisive and widespread fraud, there is not even a scintilla of evidence, anywhere, to support such piffle,’ the former RNC chair said.

‘The former president didn’t experience defeat in 2020 because of fraud,’ he continued. ‘The truth is quite the opposite.’

‘The defeat of the former president is explained by the fact that legions of responsible citizens, part of that Great Middle of America, voted the way they did because they embraced the very fidelity to their county and its Constitution that the RNC claims to embrace in its Party Platform,’ he added.

Racicot said what the RNC must do now is dismiss the resolution ‘rebuking and deserting’ Cheney and Kinzinger.

‘I urge the pursuit of this remedy with the understanding that we’re human, that politics is a competitive enterprise and that sometimes we make mistakes,’ he advised. ‘But I also believe in such a situation the final measure of our character is whether we have the insight and courage to humbly and honestly correct them.’