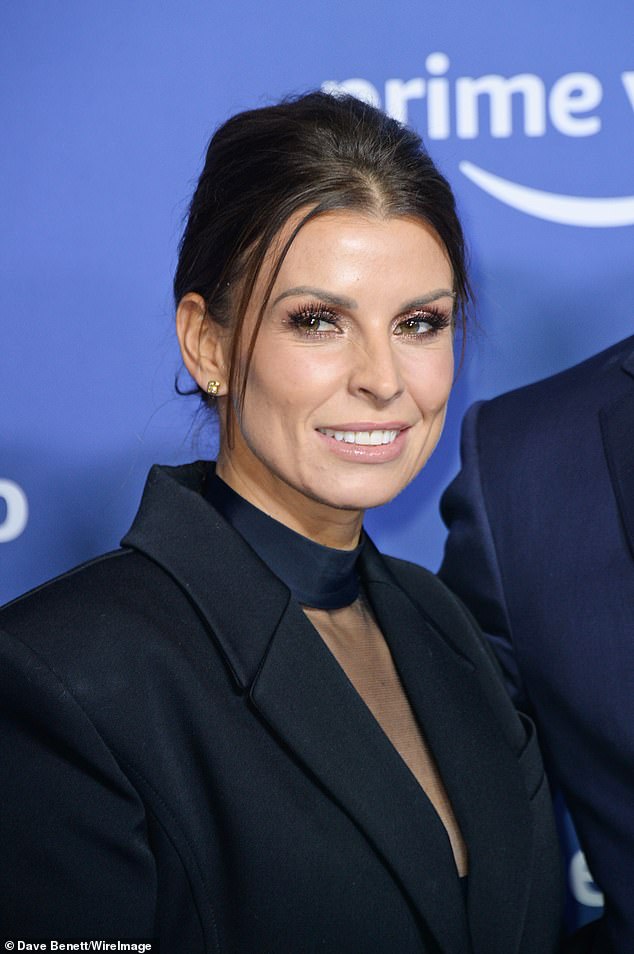 Coleen Rooney will reportedly have to cough up Becky Vardy’s eye-watering £250,000 legal bill, as their acrimonious ‘Wagatha Christie’ saga continues.

Professional footballer Wayne’s wife, 35, had previously been ruled to pay £65,000 in fees after being refused permission to bring the agent of Jamie Vardy’s spouse, 39, to the High Court.

A source told The Sun: ‘As if losing this latest round of the legal battle and having to pay almost £70,000 to cover Caroline’s legal fees wasn’t bad enough, Coleen has now been stuck with another massive bill.

Oh no! Coleen Rooney will reportedly have to cough up Becky Vardy’s eye-watering £250,000 legal bill, as their acrimonious ‘Wagatha Christie’ saga continues (pictured on February 9)

‘As part of the ruling she is having to cover 20 per cent of Becky’s legal bill for this hearing, which will be a minimum of 40k, and another 65,000 for Caroline plus 165k of her own costs.

‘It means, in total, she will be forking out a quarter of a million pounds — so far. The spiralling legal costs in this case are grotesque.’

Coleen’s lawyers previously claimed that Becky had leaked information to The Sun either directly or through her agent Caroline Watt ‘acting on her instruction or with her knowing approval’.

She asked for permission to bring an ‘additional claim’ against Caroline for misuse of private information and wanted it to be heard alongside the libel case.

Raking it in: Footballer Wayne’s wife, 35, had previously been ruled to pay £65,000 in fees after being refused permission to bring the agent of Jamie Vardy’s spouse, 39, (pictured) to the High Court

But in a ruling on Monday, following a two-day hearing last week, Mrs Justice Steyn refused permission for the additional claim against Caroline. She also ordered Coleen to pay £65,000 towards Ms Watt’s legal costs.

The two warring WAGs are now set for a £1million legal showdown in May after the High Court judge ruled on key areas that could decide the case and insisted that it needed to be settled at a full trial as quickly as possible.

Coleen has also been dealing with the flood of opinions coming in following the airing of husband Wayne’s candid documentary.

The beauty appears alongside her husband in the documentary, Rooney, which was released on Prime Video on Friday.

Difficult: A source said: ‘As if losing this latest round of the legal battle and having to pay almost £70,000 to cover Caroline’s legal fees wasn’t bad enough, Coleen has now been stuck with another massive bill’ (pictured on February 9)

Coleen spoke out about Wayne’s drinking and cheating for the first time in the documentary.

Wayne’s wife of 14 years insisted in the film that ‘I wouldn’t be standing here if I hadn’t forgiven him,’ as she reflected on their 20 year relationship from teenagers to parents of four.

The documentary looks back on Wayne’s life from his council estate upbringing in the Liverpool district of Croxteth through to the soaring heights of his football career and throughout it all, his relationship with Coleen, who first met at the age of 12.

Speaking about their teenage romance, Wayne says in the documentary: ‘I think when I was about 11 or 12 I knew that I wanted to marry her, and I said that to her at the time. I said ‘when we grow up we’re going to get married and you’re going to have our kids’. She was looking at me like ‘yeah good one!”

Messy: Coleen’s lawyers previously claimed that Becky (pictured) had leaked information to The Sun either directly or through her agent Caroline Watt ‘acting on her instruction or with her knowing approval’

Coleen agrees, admitting of her husband: ‘He’s a charmer, growing up that’s how he won me over. The more I said no the more he said ‘I will one day get that date’.’

‘I always remember he used to hang around by where I lived and every now and again you’d get his mum shouting up and down the street, ‘Wayne!’.

Wayne’s charm came in the form of poems, one of which had the title ‘Wiggle Wiggle’, and which Coleen has kept to this day, telling the camera ‘they’re very romantic, you can tell he loves me.’

Wayne and Coleen began dating aged 16 and went on to marry in a lavish ceremony in Portofino in 2008. They are now parents to their four sons.

‘That’s what happened, it doesn’t take away any of my love for Coleen, it happened. It was a wrong decision to make, I held my hands up and we worked through it.’

Coleen says she relied on the support of her family and her own instincts to help her through, pointing out: ‘When you’re making those decisions you’ve got to focus on what you want and not other people because you have so many people saying different things to you. ‘Oh why is she getting back with him?”

‘Obviously I listen to the people that matter to me, my mum and dad always give me a positive outlook on things. There’s nothing that we can’t deal with and that’s my way in a situation – let’s sit down and see what we can do and can we make it work? And we have. We’re not the lovey-dovey type anyway, we like to have a laugh and we work well together.’

JANUARY 2019: Ms Vardy texts Miss Watt and is said to have described Coleen as a ‘nasty b****… I’ve taken a big dislike to her! She thinks she’s amazing…Would love to leak those stories’

FEBRUARY 2019: Ms Watt and Ms Vardy realise Rooney has unfollowed them on Instagram. In a series of messages, Rebekah, who is married to Leicester City striker Jamie, 35, is said to have described Coleen as a ‘nasty b****’ and a ‘c***’, while Ms Watt brands the wife of former Manchester United star Wayne Rooney as ‘trash’ and ‘up her own ar**’

OCTOBER 2019:  The pair discuss their response to Coleen’s now infamous Wagatha Christie claims. The text messages are said to show Rebekah describing Mrs Rooney as a ‘b***’ and a ‘c***’

She adds that there is some element of truth to the idea that they stayed together for their four boys, explaining: ‘That was part of it but also we still love each other.

‘Hopefully he’s learnt and he doesn’t get himself into any of those horrible situations again. But it’s happened and I’ve got to live with it, if I couldn’t cope with living with it I would have ended the relationship.’

She later adds when asked if she had forgiven her husband: ‘Life goes on and I’ve moved on. You’ve moved on. Not the behaviour, no. It’s not acceptable.

‘Forgiveness I’d say is different. It’s not acceptable what he’s done but it’s happened and that was a stage of life that we were in at the time. But we’ve moved on.

‘I forgive him but it wasn’t acceptable. If it comes up we talk about it like we are talking about it now. I haven’t got the anger I did at the time.’

She added: ‘I do think it’s amazing that we are where we are today. We’re lucky that we both had the strength and support of each other and the people around us to keep going. That’s something we’ve had to work hard at.

‘I wouldn’t be standing here if I hadn’t forgiven him.’

While Wayne says: ‘It’s important that teammates, friends, family remember me for who I am rather than what I’ve done. Stuff that has happened in the past, with girls for instance. Stuff I regret. It’s something I feel that has stuck against my name.

‘I think it’s important because it is part of what has happened with my life growing up. People still see that and look at me in a different way. I’m not that type of person.’

Awkward: Ms Watt allegedly planned to blame ‘one of the girls in the office’ if it became ‘undeniably obvious’ she leaked Ms Rooney’s private information to the press, according to texts shown to High Court