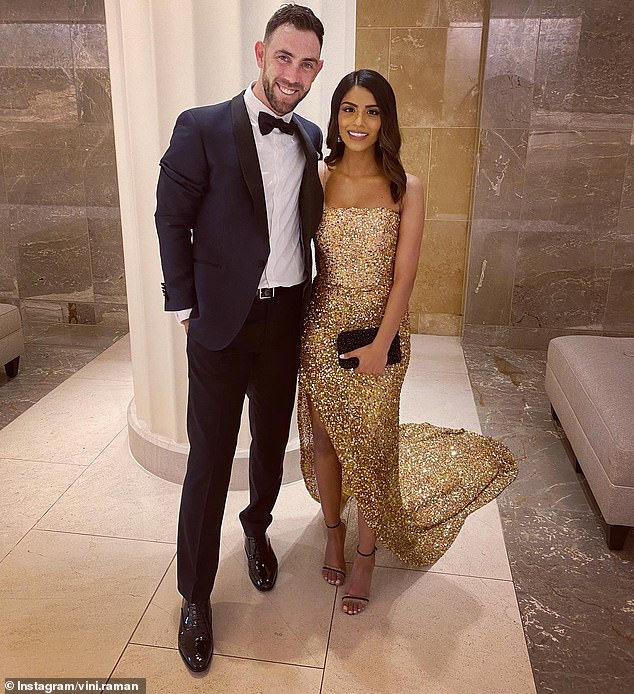 
An invitation to the lavish wedding of Australian cricket star Glenn Maxwell has been leaked online.

The talented all-rounder, 33, was recently informed by a former teammate from the Indian Premier League that details of his pending nuptials to partner Vini Raman could be seen by millions globally.

‘I had a bit of a worrying day the other day,’ Maxwell said during Australia’s T20 win over Sri Lanka on Tuesday night.

‘I got sent a photo from an ex-IPL teammate… and he had been sent the (traditional) Tamil wedding invite by numerous amount of people.

‘So unfortunately that was making the rounds online. I think we’re going to have to increase security at our Hindu wedding.

Maxwell also stated tying the knot will be ‘a bit of a festival.’

‘There’s three events during the week from Monday onwards – including two the week before,’ he said.

‘It’s a bit of a festival for my wedding this year.’

Finalising a date proved to be challenging for Maxwell, who eventually settled on a week in March.

Cricket Australia later confirmed a historic tour of Pakistan next month, but Maxwell has opted to stay home and marry his life partner.

‘When I organised the dates with CA there was a two week gap where I could potentially have it, so when I sorted that out I was pretty happy I wasn’t going to be missing any games,’ he said.

‘Then it came to the contract meeting midway through last year and (CA) said this is the Pakistan series and I said, ‘well that’s obviously changed since the last conversation we had’…but happy wife, happy life.’

Maxwell made his first class debut for Victoria in 2010 and entered the Australian ranks two years later.

His dynamic approach at the crease has earnt him the nickname the ‘Big Show’.

Last month he smashed an unbeaten 154 from just 64 balls in a T20 Big Bash match for Melbourne Stars against the Hobart Hurricanes at the MCG.

Maxwell, 33, made his debut for Australia in 2012 and has since become a regular in limited overs international cricket