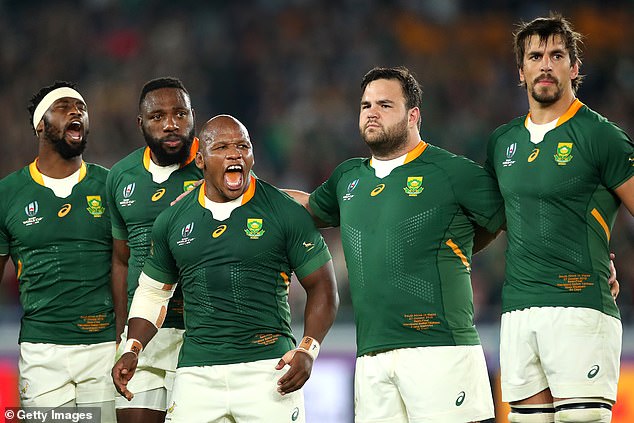 CHRIS FOY: The Six Nations’ cosy club does need a shake-up, but South Africa are NOT the answer… CVC should focus on enhancing potential elsewhere in Europe, while losing the Boks would rip the soul out of the Rugby Championship


The Six Nations does not need South Africa — but the Southern Hemisphere really does. What the Six Nations needs is a stronger second tier to introduce the jeopardy of relegation.

This is no knee-jerk demand for the status quo to be retained. Rugby requires a shake-up, that is beyond any doubt. It is not fulfilling its potential at any level. But the answer is not to just cluster together most of the world’s traditional nations and leave the rest adrift.

What makes the Six Nations special is the fierce, traditional rivalries based on geographical proximity and shared history. That could be applied to other neighbouring countries, too.

There have long been loud calls for Georgia — the best of those stuck outside the cosy club — to be given a shot at entry through a promotion system; either automatic or via a play-off. But imagine the potential elsewhere.

Imagine if CVC’s investment was focused on enhancing the potential in Spain, Belgium, Germany, Romania and Portugal, who claimed a draw against Georgia in Tbilisi earlier this month?

Imagine if that was a long-term strategy, along with commercial pressure being applied to open up the closed shop of the Six Nations. Imagine France v Spain one day, or England v Germany. Now those would be extremely enticing prospects.

South Africa are a superpower of the sport. The Springboks are world champions and the country produces an astonishing number of professional players. Their long-range rivalry with New Zealand is one of the great beacons of the rugby landscape.

If the Springboks align with Europe, there is a big threat of rugby withering in the South

Their presence is vital to the future prosperity of the Rugby Championship. Losing the Boks would rip the soul out of that troubled event.

If South Africa are aligned with Europe, commercially and competitively, there is a very real threat of the game withering in Australia and New Zealand.

The target for CVC is quick profit. This is not a shock to anyone who observed their involvement in Formula One. But what rugby needs is investment to expand and strengthen. What it needs is the Boks to stay with the south, but for both sides of the Equator to have enhanced depth.

Add Fiji and Japan to the Rugby Championship — with a pathway for Samoa, Tonga, Uruguay and perhaps, in time, Chile and Brazil. And reinforce Europe’s second tier to add relegation tension to the drama of the Six Nations. But that is a sporting vision, not a financial one.