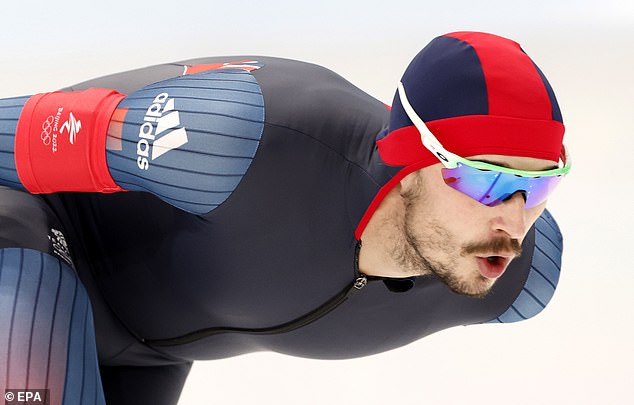 
Cornelius Kersten came within three tenths of a second of claiming a remarkable speed skating medal for Great Britain at the Winter Olympics in Beijing on Friday.

The 27-year-old finished in ninth place in the men’s 1000 metres, just 0.31 seconds off third-placed Haavard Lorentzen of Norway, for the best result by a British Olympic speed skater in 58 years.

‘On the one hand I’m really happy but to be that close to the podium is slightly frustrating – those three tenths were really in there,’ said Kersten.

‘This is the hardest 1000m I’ve ever done and I’m pretty proud of myself but it was so close.

‘I need just another year of hard work and good training to really close that gap, this is my first year training at a world level and look how close I’ve come.”

Kersten and his partner Ellia Smeding were the first speed skaters to represent Great Britain at the Games since 1992. Earlier, he finished 25th in the 500m and 19th in the 1500m.

He added: ‘If you compare me with my rivals, I just need another year to get a lot closer to them.

‘Skaters don’t tend to peak until their late 20s, early 30s, so there is a lot more time for me to develop as we look towards the next Olympics.’