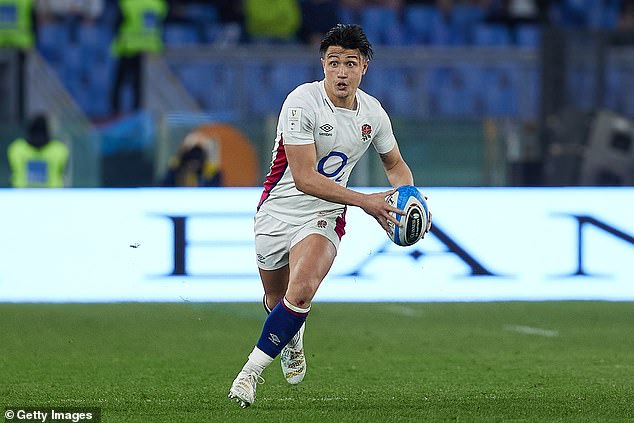 If Marcus Smith needed any more assurance that he is the new poster boy of English rugby, he received it this week when faced with questions about his latest boy band hairstyle.

Do his parents like it? Does it get in his eyes? Will he get it cut? Welcome to the fame game.

Having established himself as the nation’s No 10, Smith is swiftly becoming one of the sport’s most recognisable faces. With the possible exception of Danny Cipriani, no young English rugby player has attracted the same level of attention since Jonny Wilkinson.

Has Smith, who was named man of the match in Italy last Sunday, noticed more interest off the back of his England exploits?

‘I guess as a human being you hear about it and sometimes see it, but I try to keep my distance,’ he said. ‘I sort of go from there. Walking through Guildford is still the same. I am still able to go for my coffees and my Nando’s on my days off. I don’t get hassled too much… it is not football.

‘I am very lucky to have brilliant people around me.’

As a regular guest at England’s Six Nations training base, Wilkinson is on hand to offer advice. The pair work closely together on kicking — helping Smith become the competition’s joint leading points scorer after two rounds with 30 points — and discuss the pressures of the job.

Asked what advice Wilkinson has offered about his own struggles with the spotlight, Smith said: ‘That’s something that you can’t really teach or prepare anyone for. It’s one of those things that you have got to experience the easy way or the hard way.

‘Touch wood, so far it hasn’t been any stress on me. I am happy and enjoying my life at the minute.

‘If you can learn to control those sort of things, you eventually become bulletproof, which is where he was towards the latter stages of his career. I am learning a lot off him with regard to my mental strength and stability.’

Over the last 12 months, Smith has barely put a foot wrong. But his two siblings, Tomas and Luc, are on hand to keep his feet on the ground. They often rib him about his haircut and ensure that he does not suffer from an inflated ego.

‘The other week, I did a drop-goal that didn’t go above the bar, and my brothers were laughing their heads off, peppering me with images and videos of it,’ said Smith, 23. ‘Those two are so special to me.

‘Ever since I was young, back home in Asia, we used to go on rugby tours to Malaysia and those two wouldn’t play for their own teams because they’d want to watch me.

‘They would travel to Australia and miss their own games to come and support me as a family. It was extremely special.

‘It allowed us to travel as a family and stick together as a tight-knit group.

‘If I start getting too big for my boots, my parents will step in and tell me I am going down the wrong path, that I am not Marcus any more. For me, that is the most important thing, to be true to myself.’

The family will be on hand to offer more advice at Twickenham next week, when England take on Wales. Smith will be up against fellow Lions tourist Louis Rees-Zammit — having shared tea-boy duties as the youngest players on last summer’s tour of South Africa.

‘On drinks nights and stuff like that, me, Louis Rees-Zammit and Tom Curry had to serve the boys drinks,’ said Smith. ‘Get up for the boys and get them glasses if they needed glasses.

Smith was part of the British & Irish Lions squad in 2021, and has continued to thrive ever since

‘I guess it is part and parcel of any walk of life if you are new to an environment, like doing the tea rounds, I guess.

‘My dad told me he used to do the tea rounds when he first started working at an estate agent in Brighton. It happens everywhere.

‘You’ve got to do your work. It was the same with my mum when she worked at Cathay Pacific.

‘I’m still doing the tea round. When I roomed with Manu Tuilagi, we had a lot of tea nights together. A shortbread if we’re lucky. I obviously made them… he was on his bed playing chess! It is massively important. It is a way of bonding as a team, which is important for us as this new group of England.’

The new England project is well underway. As for the new haircut, that will have to wait.

‘I kind of like it,’ said Smith. ‘I have grown up with long hair and my mum always wanted us to have long hair. She wanted us to be like the Jonas brothers when we were younger.

‘I have got to keep her happy. It does not distract me too much, only when it gets really wet. I am dealing with it at the minute and if it gets too much of a distraction or if it becomes unlucky, then I will get rid of it.’