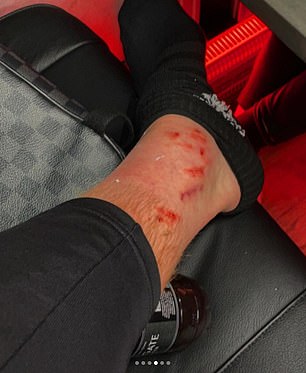 
Manchester United midfielder Scott McTominay has showed off some nasty ankle scars after a ‘proper game’ against Leeds on Sunday.

Ralf Rangnick’s men rallied after a second-half comeback from Leeds to win 4-2 at Elland Road, in a match in which treacherous conditions made for an engrossing, physical Premier League contest.

Scotland international McTominay got stuck in from the off and in a post on Instagram captioned ‘Leeds away – proper game’, the 25-year-old posted a photo of his ankle with numerous fresh scars following the contest.

McTominay was flying into challenges straight away, with heavy rain in Leeds making for an old-school clash between two fierce rivals.

After 14 minutes, the midfielder flew into a challenge with Leeds defender Robin Koch, in which the Leeds defender needed medical assistance to the head after a forearm smash.

McTominay escaped with a warning from the referee, while Koch continued but was later substituted in the 31st minute due to concerns over concussion.

McTominay was eventually cautioned in the 78th minute after getting nowhere near the ball with a tackle on Joe Gelhardt.

The home-grown United star was also involved in a fracas as full-time approached but remained on the pitch for the whole 90 minutes.

A vital win for United means they are now in fourth place, four points above West Ham below them.

Harry Maguire, Bruno Fernandes, Fred and Anthony Elanga were all on the scoresheet in a feisty encounter – United’s next game is in the Champions League last-16 at Atletico Madrid on Wednesday.