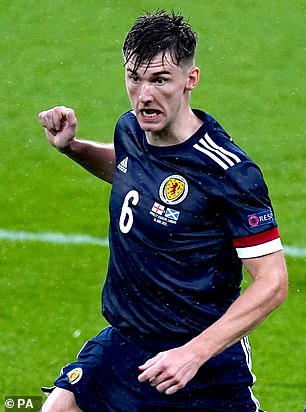 Speaking on his Scotland tenure so far, Clarke revealed he made the decision to switch to a back three and insisted a conversation with Tierney was key to the change.

He revealed that he told the Arsenal man that he would be Scotland’s ‘best ever left-sided centre back’ as he tried to figure out a way to work both Tierney and Andrew Robertson into the team.

Clarke told the High Performance Podcast: ‘Between November and March I was thinking about what we were good at. Defensively we weren’t great and needed a change.

‘The personnel we had – we had two of the best left-backs in world football, Tierney and Robertson, and had to figure out how to get them in the team.

‘At that moment I didn’t think the centre-back options were great, so let’s pick three and see if that makes it better!

‘My idea was that Tierney could play centre-back and I had this mad idea that Scott McTominay could play as one of the others. I had good midfield players and I wanted to get three or four into the team but had nothing great up front really.

‘I had a really good conversation with Tierney to tell him he was going to be the best left-sided centre back that Scotland had ever had.’

Clarke revealed he had to persuade Tierney into the role by insisting he was better than his Liverpool counterpart.

‘A myth had built up around Kieran that he didn’t want to come and play with the national team, which wasn’t correct. But I think he always felt that he was a better left-back than Andy Robertson.

‘Every player thinks they’re better than the immediate competition and if you compare them, there isn’t a cigarette paper between them.

‘I had to persuade Kieran that he was better than Andy and that’s why I trusted him to play left centre-back and not Andy. Now, that’s probably not strictly true but that’s how I had to sell it to Kieran.

‘Now we’ve got the best overlapping centre-back in world football. It works.

‘Selling that position to Kieran was important and it was a really good conversation, he asked a lot of really good questions.

‘I told him I loved him and I wanted him to play there.’