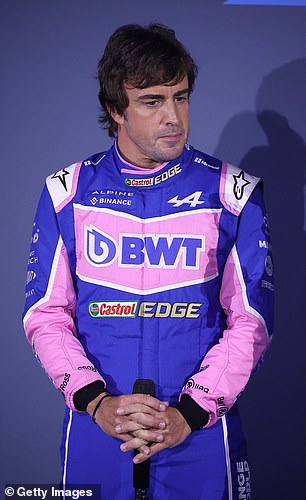 
Fernando Alonso has admitted he hopes the recent sacking of F1 race director Michael Masi was not down to his handling of the Abu Dhabi Grand Prix in December.

Masi was dismissed from his role last week following an FIA inquiry into the season finale that saw Lewis Hamilton controversially beaten on the final lap by Max Verstappen.

Masi was heavily criticised for his handling of the safety car in the final laps of the season finale in December at the Yas Marina circuit, with his calls creating a scenario that heavily favoured Verstappen to overtake his rival and claim the world title in the most dramatic fashion.

Alonso endured a notorious rivalry with Hamilton during their time together as McLaren team-mates in 2007.

But the two-time world champion stopped short of disagreeing flat out over Masi’s departure and has faith that new FIA president Mohammed Ben Sulayem has made the right call overall in dismissing the former race director.

‘I mean… the new president obviously wanted to make sure that everything was in place, as I said also a couple of times I like Mohammed, I like the approach he has’, Alonso said as quoted by The-Race.

‘So if he thinks that we needed some new ideas there, it’s for the good for everyone, so I’m happy with that.

‘On the whole theme of Abu Dhabi, maybe I have a different opinion, I don’t think that there was anything wrong there.

‘I don’t think that they changed it [the race control structure] because of Abu Dhabi, or I hope not.’

Alonso was one of the most outspoken drivers over the officiating during the 2021 season, and even called Masi ‘too soft’ before the race in Abu Dhabi after the race director failed to take action on a driver from effectively blocking his qualifying lap.

Alonso’s calls come after Daniel Ricciardo threw out suggestions that his former-team-mate Verstappen did not deserve the F1 title following the controversy in Abu Dhabi.

Alonso was speaking at the launch of his Alpine team’s new car for the season, which will feature a brand new look for the start of the campaign.

The team launched two brand new liveries ahead of pre-season testing in Barcelona, with a new sponsorship deal seeing them run in pink for the first two races – much like previous F1 teams Racing Point and Force India.

The team will then revert back to a more familiar metallic blue livery, with traces of pink remaining on the car as their default livery for the 2022 campaign.