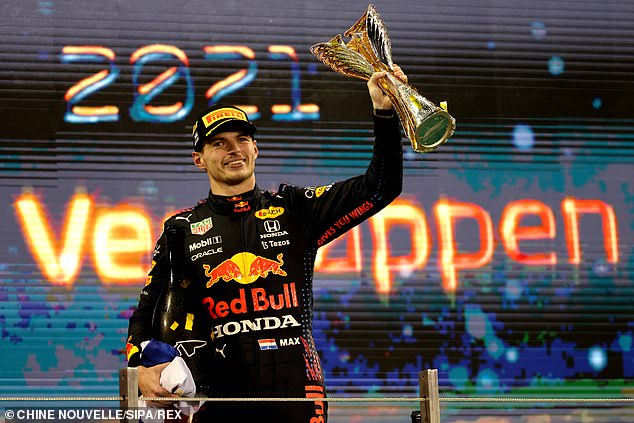 Max Verstappen ‘absolutely deserves’ to be Formula One world champion despite controversial win over Lewis Hamilton in Abu Dhabi, says former Red Bull team-mate Daniel Ricciardo… as he insists it was ‘a matter of time for him to get a title’


Daniel Ricciardo has strongly disagreed with claims that his former team-mate Max Verstappen is not a worthy World Champion based on the controversial ending to the 2021 season.

Former F1 race director Michael Masi’s decision to let the cars between Verstappen and Lewis Hamilton unlap themselves behind the safety car at the end of the now-infamous Abu Dhabi Grand Prix in December.

The last minute changing of the rules cost Hamilton the world title, and led to calls for Masi’s job from fans and even Mercedes themselves – he has since been relieved of his duties.

Ricciardo, however, thinks that the way in which this was decided does not take away from the Red Bull driver deserving to win.

‘That was kind of, in a way, the shame with [what happened in Abu Dhabi],’ Ricciardo told RacingNews365.

‘There was always going to be a winner and a loser last year, no matter how the last race ended, even if it was a boring last lap finish.

‘But they both truly deserved a title. They’ve both done phenomenal races, they both come back, and so someone was always going to lose out, I guess.

‘Obviously there’s the Lewis side, but there shouldn’t be a “Max doesn’t deserve it’ side, because he absolutely also deserved it.”‘

The Australian was often on equal terms with Verstappen during their time as team-mates at Red Bull between 2016 and 2018.

Ricciardo beat Verstappen in the standings in their first two seasons together, but it was Verstappen who finished ahead at the end of the 2018 campaign.

‘Yes, I’m pretty much a World Champion too,’ Ricciadro joked.

‘I don’t have the bonus, or the big trophy, but I can tell you.’

On a serious note, Ricciardo says he was not surprised to see Verstappen eventually win the title given the close battles he was involved in with the Dutchman.

‘Being team-mates with Max, I knew that we were pushing each other to a pretty high level,’ the McLaren driver explained.

‘I knew that, whilst we were teammates, [even though] we weren’t World Champion[s], I felt like, [with] the way we were driving, [it] could have given us the world title, in some of those years. At least one.

‘So to see him do it after, for me, it’s not a surprise. For sure, it’s nice for me to know that we had a pretty close battle for those years [that] we were teammates.

‘But I didn’t really need to see him win the title to show that to myself. I feel like I really [have] felt that or known that for a while.

‘It was kind of a matter of time for him to get a title, for sure.’