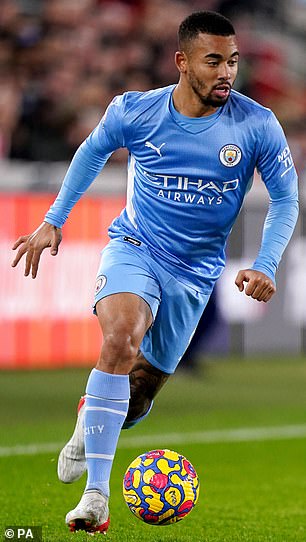 The 24-year-old has just 16 months left on his current deal at the Etihad and Pep Guardiola’s side could look to cash in on the Brazilian this summer, unless they can agree to an extension.

Inter will be primed to make a move and are likely to lead the race for his signature if Jesus becomes available, reports The Sun.

The Serie A side are said to be long-term admirers of the forward and will be set to pounce if his future in Manchester remains unresolved.

City boss Guardiola has switched Jesus out wide this season where he has impressed so far.

Jesus has not played since the winter break due to a muscle issue but has six goals and nine assists to his name in 25 appearances so far this term.

However, City may reportedly be tempted to let him leave in exchange for Inter’s Lautaro Martinez.

The Argentine is said to have caught the eye of Premier League champions with a tally of 12 goals in all competitions this season.

The 24-year-old also has an impressive overall goal-scoring record of 61 goals in 165 appearances.

However, title race rivals Liverpool are reportedly planning to hijack City’s plans for the Inter star as they plot their own move.

Jesus’s fellow forwards Raheem Sterling and Riyad Mahrez also have a year left on their contracts.

England international Sterling had been linked with Barcelona and Real Madrid earlier this season but the Catalan giants made a move for his former team-mate Ferran Torres is January.