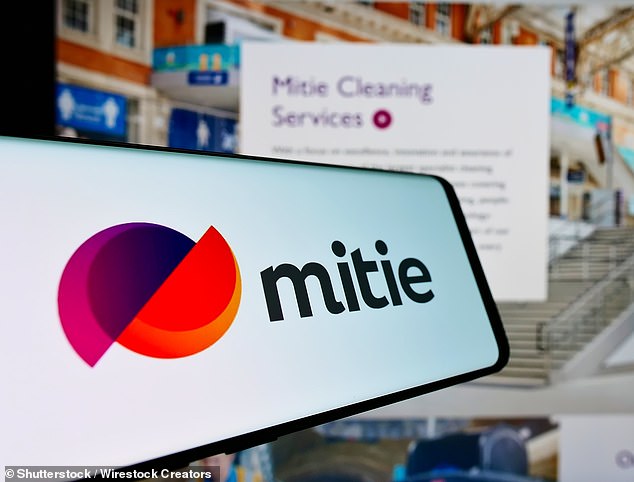 MARKET REPORT: Outsourcing firm Mitie falls 10.7% after being hit with probe by Competition and Markets Authority

Mitie shares fell after it was hit with a probe by competition regulators.

It tumbled 10.7 per cent, or 5.65p, to 47.35p after the Competition and Markets Authority launched an investigation into contracts for two immigrant removal centres, looking into ‘suspected anti-competitive conduct’ concerning the government process used to find companies to operate services at the Heathrow and Derwentside sites.

The watchdog stressed that it had not yet reached a conclusion.

Probe: Mitie tumbled 10.7 per cent, or 5.65p, to 47.35p after the Competition and Markets Authority launched an investigation

Mitie said it was fully cooperating and confident that there was ‘no case to answer’ and that it would be ‘fully exonerated’.

It is the second scandal at Mitie in a week after chief executive Phil Bentley apologised to Home Secretary Priti Patel as it emerged that some of its staff had been sharing racist WhatsApp messages. The incident led to the suspension of eight employees.

Mitie is one of the Government’s top suppliers and has raked in billions of pounds from public sector contracts.

The FTSE 250 fared little better, slumping 3.5 per cent, or 692.02 points, to 19387.68. Markets were panicked by fire at a Ukrainian nuclear power plant, Europe’s largest, after shelling by Russian forces who seized the site.

Traders are also increasingly worried that soaring commodity costs caused by potential shortages of energy and raw materials risk exacerbating inflation. Meanwhile, the purge of Russian firms continued with another eight suspended from the market, several with links to Russian oligarchs.

Rolls-Royce, which makes turbine engines for passenger aircraft, fell 5 per cent, or 4.77p, to 90.23p amid fears of lower demand.

UK gas prices hit a record 450p per therm yesterday as the energy crisis deepened. However, it was good news for British Gas owner Centrica, which jumped 0.3 per cent, or 0.24p, to 72.8p.

Packaging firm Mondi lost 6.6 per cent, or 95.5p, to 1347.5p amid increased worries about the impact of the conflict on its business. The firm has suspended production in Ukraine but also has a factory in Russia which last year accounted for 12 per cent of its revenues.

Hammerson, owner of the Bullring shopping centre in Birmingham, reported a loss for 2021 of £429.1million, narrowed from a £1.7billion loss the previous year as the return of shoppers boosted rents. It rose 1.1 per cent or 0.38p, to 35p.  Vet firm CVS was down 2.7 per cent, or 46p, at 1666p after regulators said the firm had offered to sell a chain of surgeries to address competition concerns after its acquisition of rival Quality Pet Care last year.

And broadcaster ITV fell 6.2 per cent, or 4.96p, to 75.26p after Barclays analysts downgraded the stock.