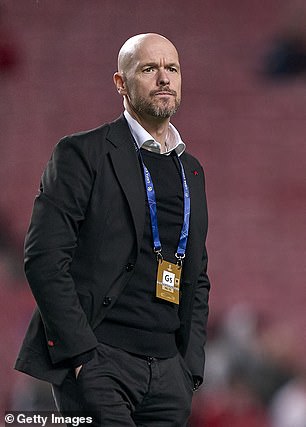 Manchester United’s new manager ‘will be given just £50m to splash out this summer if Ralf Rangnick fails to guide his strugglers into the Champions League’… as ‘Paul Pogba, Jesse Lingard, Edinson Cavani and Juan Mata look set to depart’


Manchester United’s next manager could have just £50million to revamp the squad for next season, if they fail to make the Champions League.

The Red Devils board are expected to hold talks with PSG boss Mauricio Pochettino and Ajax manager Erik ten Hag in the coming weeks – both remaining the club’s top two targets.

Both targets could be deterred or not best pleased by those limited funds with the squad needing to be freshened up desperately – having not won any silverware since winning the Europa League in 2017.

Manchester United’s next manager, which could be either Erik ten Hag (left) or Mauricio Pochettino (right) could be left with just £50 million to spend this summer

United currently sit fourth in the Premier League, but Arsenal are just two points behind with three games in hand, while West Ham and Tottenham are also not far behind in the race for Europe.

They must hang onto that fourth position or pull off a Champions League triumph in order to bolster their transfer kitty for the new boss.

The Telegraph claim the new manager will have around £80m to spend if United do claim a Champions League spot but that kitty will be lowered to closer to £50m if Ralf Rangnick fails to get his side to finish in the top four.

This means most Red Devils fans will not be pleased with the latest news as the midfield and strike force needs reinforcements badly this summer with plenty of squad players needed with that many expected departures.

Other transfer funds can be raised by selling players surplus to requirements, although their players are on good salaries which other clubs may struggle to match.

United’s latest financial figures were released last week and revealed their debt is now £494.8mmillion, up 8.6 per cent from their previous announcement.

Southampton boss Ralph Hasenhuttl has reportedly been added to the Man United shortlist for their manager position in the summer, in previous reports.

In his third full season on the south coast, the Austrian has impressed and his Saints side are currently ninth in the Premier League table.

They have taken some notable scalps this season including a win at Tottenham and a 1-1 draw at both Manchester clubs.

If they fail to entice Pochettino or Ten Hag, they could move their focus onto Hasenhuttl.