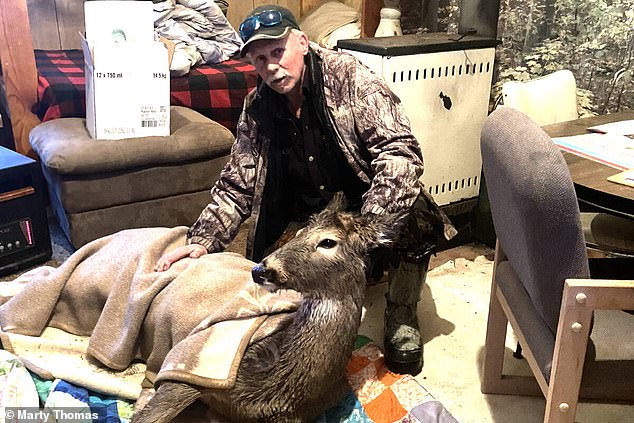 
This is the heartwarming moment a hunting guide rescued a stricken deer after it fell through river ice in rural Canada.

Video shot by Marlene Thomas shows her husband, Marty, 63, pulling a deer out of the ice-covered Kettle River in Grand Forks, British Columbia, using a canoe.

The film captures Mr Thomas using a piece of rope to tow the deer as he paddles through a channel in the ice before he eventually he manages to pull the buck to shore.

Marty Thomas, from Grand Forks, British Columbia, with the deer, which he put in a heated mini cabin wrapped in blankets to recover. The animal had vanished by the time he returned at 4am the next day

Mr Thomas said he went into action at around 4pm on February 28, when a friend alerted him to the deer’s plight.

‘I got a phone call that a deer had gone through the ice, so I got my wife, Marlene, and my grandson to go down to see.

‘And there was the deer, which had broken through the ice,’ Mr Thomas told Global News.

Initially, Mr Thomas and another man planned to paddle out to the deer to rescue it – but the thick layer of ice covering the surface proved to be too much of a barrier.

Mr Thomas then decided to go out alone in the canoe, as it could have broken apart on the river ice if there were two people in it.

He added: ‘[The deer] was just in the water. And then I had to get the canoe up and around him into open water. And from there, I just towed him down an open passage.

The young buck spent the night in a haystack carefully prepared by Mr and Mrs Thomas, before it made its departure

After wading through the waters, Mr Thomas lifted the deer and helped it on to shore before taking it in indoors to recover

Mr Thomas said the deer could barely move from the cold and was too exhausted to stand.

He guessed the deer to be around three years old and thought that it weighed around 150 pounds.

After brining the deer on to land, he allowed it to rest in a heated mini-cabin with some hay and a blanket.

When he next went to check on it at 4am, the animal had fled back into the wild.

‘For 38 years, no kidding… it makes me emotional, I’ve actually been a hunting guy for 38 years and a taxidermist,’ Mr Thomas told CBC News.

‘It’s been my whole life, I make a living off wildlife and so to help, yeah, to give back like that was just, you know, it felt good.’

Mrs Thomas wrote on Facebook: ‘My husband fell through as he was pulling the canoe out. Thankfully [the river] was not really deep where that happened, I was stressing out for them both.

‘Thank you to all the other people that were there to help and the canoe which belonged to Jan Dehann, someone was looking out for us all.’