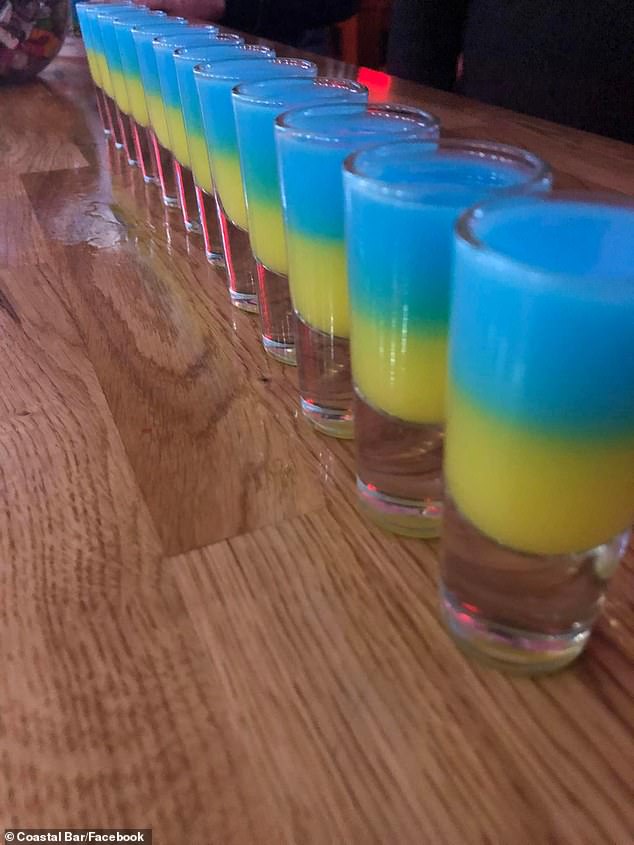 
A bar has been slammed for offering blue and yellow drinks to toast Russian planes being shot down over Ukraine while a pub has been praised for inviting drinkers to ‘have a wee on Putin’ after putting an image of the Russian president’s face on its urinal.

The drinks were offered to punters at Coastal Bar, in Ramsgate, Kent, while the picture of Vladimir Putin can be found in the men’s bathroom at Raglan Road Irish Bar, in Nottingham.

But the two businesses were met with differing reactions when they posted on social media.

Coastal Bar, in Ramsgate, Kent, created blue and yellow drinks to toast Russian planes being shot down over Ukraine

While the Raglan Road Irish Bar, in Nottingham, installed a picture of Vladimir Putin as the backdrop of the urinals

Bosses of the Coastal Bar said the drinks were created to toast Russian planes being shot out of the sky and made reference to the ‘Ghost of Kyiv’ – the unnamed Ukrainian pilot who has reportedly shot down ten Russian jets, including six on February 24.

The drinks are made of six different spirits and when poured out are half and half yellow, bar staff said.

But locals criticised the gesture, saying they should have considered raising money for the humanitarian effort in Ukraine.

Chrissey Smith fumed: ‘Hope some of your profits are going to Ukraine.

‘You missed a trick to send money to help with the humanitarian effort to help people.’

Sandra Ferguson added: ‘Hope a donation is being made for each one sold.’

Another said: ‘I don’t know about you, but I find quite this appalling

‘Even if they are free, it doesn’t seem in good taste.’

A spokesman for Coastal Bar said the shots were ‘in solidarity with Ukraine’ and given out for free.

They added: ‘There are six different spirits in each shot and are extremely time-consuming to make which is why these were made in a batch and given away for free.

‘These were made at the request of a few regular customers.

‘People talking about peace in Ukraine is never a bad thing and to raise its profile.

‘Just in the same way that most people have changed their profile pictures to the Ukrainian flag.’

Over the weekend, Raglan Road Irish Bar, in Nottingham, posted a picture of the new Vladimir Putin installation onto its Instagram account, prompting much amusement on social media.

The venue has a history of putting pictures of world leaders in the toilet, with former US President Donald Trump the first to feature.

Raglan Road Irish Bar has a history of putting pictures of world leaders in the toilet, with former US President Donald Trump the first to feature

The pub posted: ‘Time for Donald Trump to go and now come have a wee on Vladimir Putin in the men’s loos.’

In response, professional boxer and WBA world champion Leigh Wood posted a crying laughing emoji along with the hands in the air emoji.

John Holmes posted: ‘I’ll be round. Least I can do.’

And Eve Summers added: ‘Love it.’