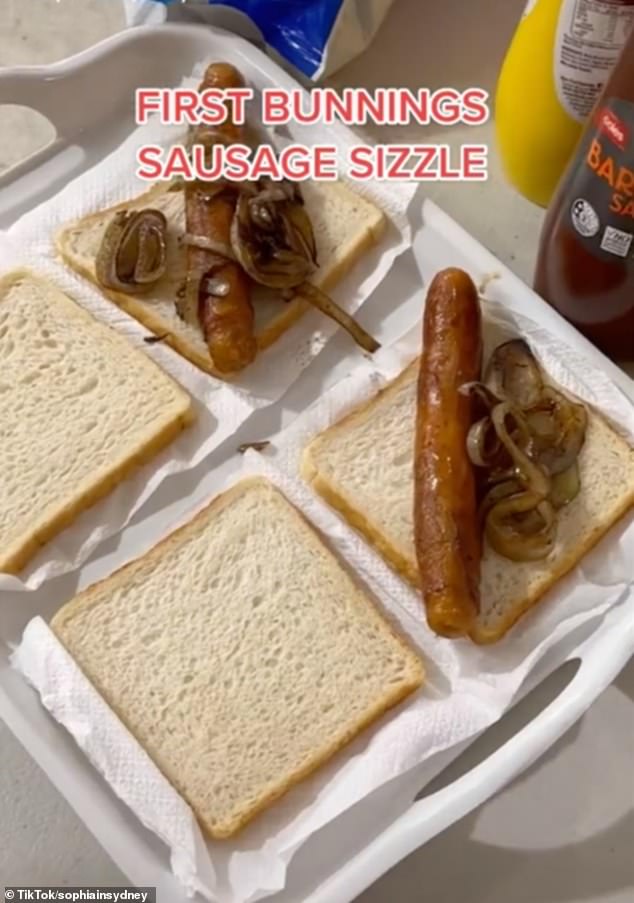 An American expat has been forced to defend her Bunnings sausage sizzle-eating style after she paired two slices of bread with the iconic meat and onion combination.

Sophia, who goes by @sophiainsydney now that she has left Los Angeles, had been asked by her Australian followers to give the hardware store’s lunchtime delicacy a try.

‘Alright, you guys have been telling me to get a sausage sizzle for the past few years,’ she said.

Sophia, who goes by @sophiainsydney now that she has left Los Angeles, had been asked by her Australian followers to give the hardware store’s lunchtime delicacy a try

‘So this is my first sausage sizzle. Honestly, the Costco hot dog is so much better than this – but whatever, I gave it a try.

‘And the proceeds go to charity so it’s for a good cause.’

More alarming than her sub par review of the experience was that she had been given two slices of bread for each sizzle – a crime dubbed ‘unAustralian’ by her fans.

‘Who set up this poor tourist to look so silly? One piece of bread folded and triangle!’ one person responded.

‘I’m telling my therapist about what you just did,’ said another.

To support the NSW and QLD communities impacted by storms and flooding, Bunnings is calling Aussies to head down to their local store this Friday the 11th of March to grab a snag, and raise much needed funds for storm relief.

All participating Bunnings stores nationally will be running a sausage sizzle fundraiser, with Bunnings team members behind the BBQ, and every cent raised is going towards assisting affected local communities.

Bunnings is working with GIVIT, a national not-for-profit donation platform working with the Queensland and New South Wales Governments to manage donations for people impacted by floods.

‘This feels so illegal to watch, back to the USA for you. Your visa is cancelled,’ wrote one woman.

Sophia was forced to defend the act by stating that this was how it had been served to her at the Bunnings store in Gladesville.

‘Guys, this is how they gave it to me in Gladesville. It would have better proportions by far if it was one piece of bread!’ she said.

‘Aussies served it to me this way.’