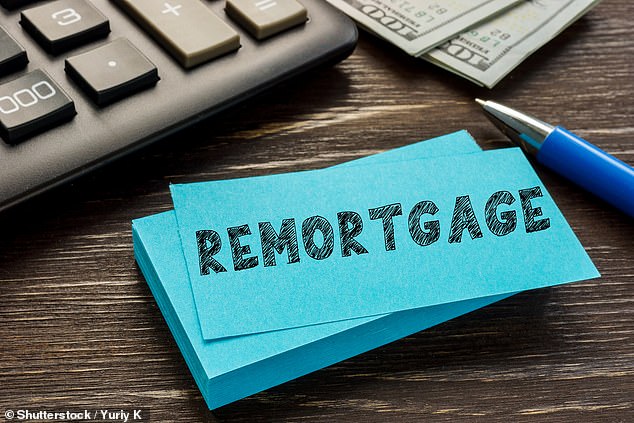 Homeowners rushed to remortgage at the end of 2021 in a bid to avoid rising interest rates, official data has revealed.

According to the Bank of England’s latest lending statistics, 28 per cent of mortgages for owner occupiers in the last three months of 2021 were remortgages.

This was the highest share seen since the start of the pandemic and represented a 10 percentage point rise annually, according to analysis by Hargreaves Lansdown.

A total of £27.3billion of remortgages were agreed, the highest in three years.

This was despite overall mortgage lending, including both mortgages and remortgages, totalling only £70.2billion – the lowest figure since autumn 2020.

Interest rates on mortgages have been climbing since late 2021, when the Bank of England increased the base rate from 0.1 per cent to 0.25 per cent.

The base rate, which heavily influences mortgage pricing because it affects banks’ own borrowing costs, subsequently increased to 0.5 per cent in February 2022.

Andrew Montlake, managing director of the UK-wide mortgage broker, Coreco, said: ‘Unsurprisingly, there is a stampede to remortgage and lock into the lowest possible fixed rates at present, before rates inevitably increase further.’

The average two and five-year fixed rates have increased for the fifth consecutive month, rising 0.21 and 0.17 percentage points respectively, according to financial information service Moneyfacts.

At 2.65 per cent, the typical two-year rate was the highest Moneyfacts had recorded since November 2015.

Data: Bank of England statistics show a sharp rise in remortgaging at the end of last year

This means those coming off two-year fixes may find their new mortgage more expensive than their previous one.

The five-year average rate of 2.88 per cent was the highest since April 2019, Moneyfacts said.

The cheapest available two-year fix, for someone with a 40 per cent deposit or equity, is currently 1.64 per cent with a £490 fee, with First Direct.

For someone with a 10 per cent deposit or equity, the best two-year fix is 1.85 per cent with Clydesdale Bank – though it comes with a hefty £1,999 fee.

This is in contrast to the summer of 2021, when mortgage rates hit all-time lows with the cheapest charging as little as 0.83 per cent.

Borrowers may also have less choice when it comes to remortgaging today, as evidence suggests lenders are removing deals from the market.

While rising rates are encouraging people to remortgage, it seems that fewer people are borrowing to buy homes in a sign that the pandemic property boom could be tailing off.

Gareth Lewis, commercial director of property lender MT Finance, said: ‘The Bank of England figures suggest a cooling of the market in the fourth quarter of last year, which is not surprising given the frenetic pace of activity over the previous 18 months.

‘That pace was not sustainable and with double-digit house-price growth pricing first-time buyers even further out of the market, a more reasonable pace, similar to pre-pandemic levels, is welcome.’

Higher interest rates could also have the effect of pushing up mortgage arrears.

While those in fixed deals are protected until the end of their term, borrowers on their lenders’ standard variable rate can often see their rate hiked when the base rate goes up.

Those who are in the middle of mortgage terms may also find their monthly payments increase the next time they remortgage, as they will be forced to take a higher rate.

Montlake added: ‘Unfortunately, we may see arrears rise in the months ahead as the Bank of England raises interest rates to contain inflation and the cost of living squeeze starts to bite.’