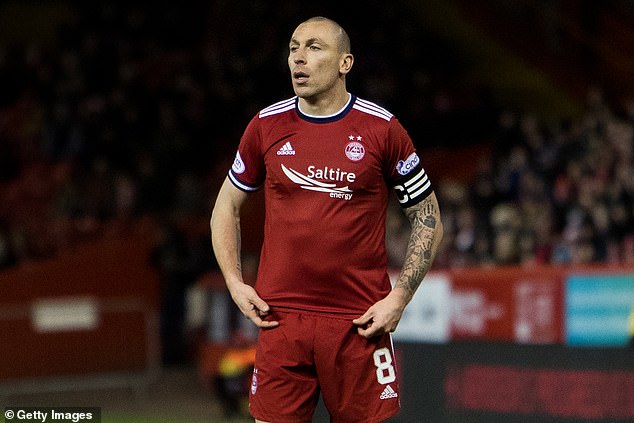 By Stephen Mcgowan for MailOnline

Scott Brown is set to reach an agreement with Aberdeen to cut his ties with the Pittodrie club.

Sportsmail revealed on Monday that the Dons captain was considering his future following the departure of former manager Stephen Glass.

Absent from the Dons squad for Saturday’s 1-0 defeat to Rangers, new boss Jim Goodwin quashed internet speculation when he blamed his captain’s absence on a lingering hamstring problem.

Sportsmail understands, however, that the 36-year-old midfielder has been unsettled since Glass was sacked after eleven months in charge.

The former Celtic captain joined the Dons as a player-coach under Glass last summer.

He was an important part of Glass’ coaching team before the manager was relieved of his duties last month.

Keen to pursue a future in management, the former Celtic and Scotland captain has been working through his coaching badges while learning the ropes at Pittodrie, making 32 appearances for the team.

Brown is now, however, considering retiring from playing and focusing on his coaching career and was even recently linked with the St Mirren job.

Jim Goodwin left the Paisley club to join Aberdeen and Brown was reportedly in the running for vacancy before Stephen Robinson was confirmed as the new boss.

The former Motherwell manager joined from League One side Morecambe last month.