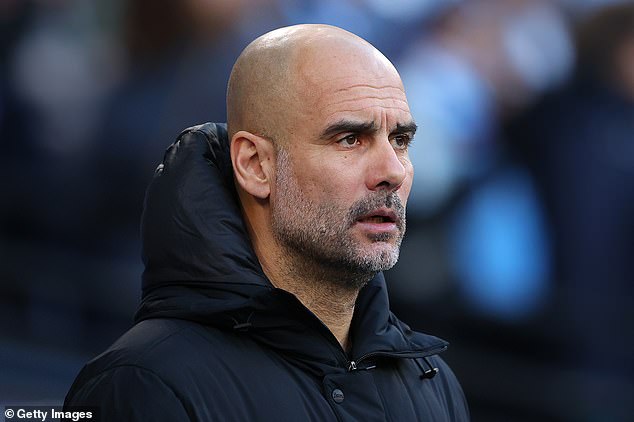 ‘He did a stupid thing. He deserves it, I’m STILL so angry with him’: Pep Guardiola reveals his rage at Kyle Walker, THREE MONTHS on from his Champions League red card – and says he didn’t want to appeal it

Pep Guardiola says he is still furious with Kyle Walker after the full-back was given his marching orders during Manchester City’s 2-1 defeat to RB Leipzig in the Champions League group stage on December 7.

Walker was handed a three-match European ban instead of the automatic one-match ban after UEFA’s control, ethics and disciplinary body referred to his foul on Andre Silva as an ‘assault’.

Guardiola says Walker deserved to be handed such a lengthy ban after committing a ‘stupid’ foul when Manchester City had already secured their place at the top of Group A.

Manchester City asked for the length of Walker’s ban to be reassessed after the incident. However, the Premier League leaders had their request denied by the Appeals Body.

Guardiola has now revealed that he was against the appeal in the first place – saying he had a ‘different’ outlook to the club when it came to Walker’s ban.

He felt that Walker deserved to be banned for three matches and insisted the layoff would force the defender to ‘learn’ from his mistake.

When asked about how he felt about the appeal on Walker’s ban being rejected, the Manchester City boss said: ‘He deserves it. Kyle Walker deserves the three match ban.

‘When a player does a stupid thing, he deserves to be banned for three games. I’m not so kind to Kyle in this kind of action. I’m still so angry with him.

‘It’s not necessary to discuss with him, he knows it. Kyle is so important for us, you saw the game he played against United?

‘But in Leipzig when we had already qualified, 80 minutes in and he made this kind of action? He deserves the three games.

‘The club appealed but I did not agree. They have to do it because in other similar cases it was just two games [but] he deserved it. Hopefully he learns for the future.’

Manchester City tried to appeal the length of Walker’s ban ahead of the their last-16 tie with Sporting Lisbon as they felt it was severe. Inter Milan midfielder Nicolo Barella was handed a two-match ban for punching Real Madrid’s Eder Militao in the leg on the same night as Walker’s indiscretion.

However, the Appeals Body rejected Manchester City’s notion and UEFA released a statement saying: ‘The appeal lodged by Manchester City FC is dismissed. Consequently, the UEFA Control, Ethics and Disciplinary Body’s decision of 25 January 2022 is upheld.

‘The CEDB had decided to suspend Manchester City FC player, Mr. Kyle Andrew Walker, for the next three (3) UEFA club competition matches for which he would be otherwise eligible, for assaulting another player.’

As a result, Walker sat out the first leg of City’s last-16 tie with Sporting Lisbon, which Guardiola’s side won 5-0.

He will also miss the second leg at the Etihad Stadium on Wednesday evening and, should City progress as expected, the first of a two-legged quarter-final clash which is set to take place in April.

Speaking after the game, Walker said he ‘made a mistake’ and insisted he would learn from it

Speaking after the incident in December, Walker said he ‘made a mistake’ and insisted he would ‘learn’ from the incident.

‘My red card against Leipzig was very bad judgement and a stupid error that a 31-year-old shouldn’t be making with the amount of games that I’ve played,’ Walker said last month.

‘I’m human, I make mistakes and I’m learning from that and will bounce back. Hopefully my performances between now and the end of the season can justify that and I’m picking up some silverware.’