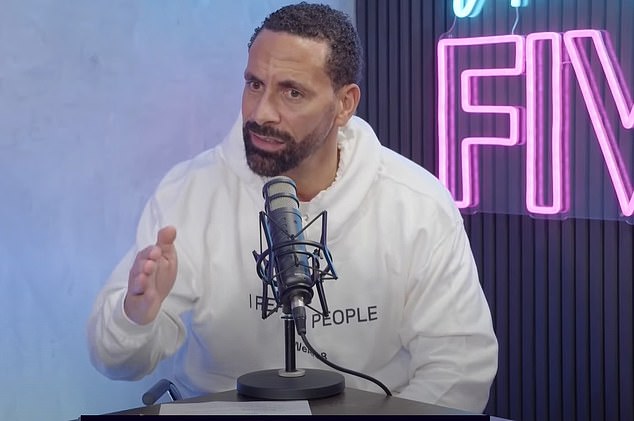 Rio Ferdinand has revealed a number of Manchester United players’ agents have been asking him to tone down his criticism of their clients’ poor form.

Ferdinand, who made 455 appearances in his 12-year United career, has not been afraid to take aim at his former club when they have underperformed this season.

On Sunday he was one of several ex-players who blasted their below-par display against Manchester City, which resulted in a heavy 4-1 loss at the home of their neighbours.

Aside from goalkeeper David de Gea, Ferdinand insisted every United player on the pitch let themselves down as they slumped to defeat at the Etihad, which has dented their chances of securing a top-four Premier League finish.

And when discussing his old side’s woes on the Vibe with Five podcast, the former England defender opened up on calls he has been receiving from United players’ agents.

He said: ‘I really, really hope these players are walking in the next day and are going, “I’m embarrassed, my pride and ego has taken a battering and I’m really embarrassed about it, I’ve got to make this right, you get me on that training field and give me every task you want to get this right”.

‘The amount of phone calls I get from agents, “oh, can you not say this, why are you criticising so and so”, do me a favour.

‘If I was being vindictive and personal and saying bad things personally about these people I’d get it, I’d take the call and say sorry.

‘You [the player] should be saying, “you know what, I know that, I understand, I know, you ain’t got to tell me, I will do better”. It’s not, “oh, you’re digging me out in public”.

‘You should be your biggest critic, you shouldn’t be thinking about what I’m saying, this is my job, I’m paid to do this. Go on the training field and work, don’t worry about me, I’m going to be sitting here talking, my career’s done.

‘When I’m highlighting the positives no one’s calling then, no one’s going, “thanks for that, you’ve done us a favour”. You don’t get that so don’t call me when I’m talking negatively about your player, I’m talking from a tactical standpoint.’