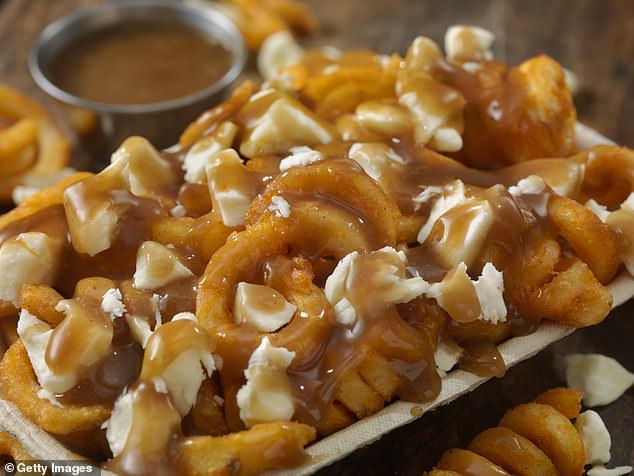 A French restaurant called La Maison de la Poutine says that it has been getting insulting calls and even threats from people who have confused the signature dish in its name with Russian President Vladimir Putin.

La Maison de la Poutine, which has locations in Paris and Toulouse, is named for the popular Canadian dish poutine, which is made up of frites, cheese curds, and gravy.

The eatery has no connection to Russia or its ruler, but some very confused and angry callers believe otherwise, prompting La Maison de la Poutine to take a stand on social media last week.

‘For the past few days, the Russian dictator, Vladimir Poutine, has been at the center of a chilling news,’ the restaurant wrote in a message on Twitter.

‘In this context, we received calls of insults and even threats,’ the continued.

‘It therefore seems necessary to us to remind [people] that the House of Putin is not linked to the Russian regime and its leader.

‘Our dish was born in Quebec in the 1950s. And the stories to tell its origin are numerous. But one thing is certain: poutine was created by passionate cooks who wanted to bring joy and comfort to their customers.

‘La Maison de la Poutine has worked since its first day to carry on these values and today brings its most sincere support to the Ukrainian people who are courageously fighting for their freedom, against the tyrannical Russian regime,’ the concluded.

The restaurant didn’t offer more details on the contents of the threatening calls.

Poutine is a popular dish that originated in Quebec and is made from frites, cheese curds, and gravy. Sometimes other toppings are added

The confusion is a bit more easily understood given that the French spelling for the Russian leader’s name is different from the English spelling.

In French, his name is, in fact, written as Vladimir Poutine.

As the New York Times explains, Russia uses the 32-letter modern Cyrillic alphabet, in which his name is spelled Путин. Translating it to languages that the 26-letter Roman alphabet — like English and French — is tricky, because the Cyrillic letters don’t all have exact Roman letter counterparts.

Speakers of both languages have done their best to approximate the spelling, but have ended up with different results.

La Maison de la Poutine is not the only restaurant trying to distance itself from the Russian ruler.

A Québec restaurant called Le Roy Jucep — which is regarded as the possible birthplace of poutine — announced shortly after the invasion of Ukraine that it would rename its famous dish for the time being.

‘Dear clients,’ they wrote on Facebook February 24. ‘Tonight the Jucep team decided to temporarily retire the word P**tine from its trademark in order to express, in its own way, its profound dismay over the situation in Ukraine.’

The temporary name would be ‘la frite fromage sauce,’ or fried cheese and gravy.

‘I know what war is and what it means for innocent civilians,’ Laurent Proulx, co-owner of the restaurant and a a veteran of the war in Afghanistan, told the New York Times. ‘I wanted to make this little gesture to show Ukrainians we are thinking of them.’

However, the Facebook post was removed the next day, with Proulx saying that pro-Russia activists has called and made threats after the announcement.

Elsewhere on social media, exasperated Twitter users are also reminding people that there’s a difference between Putin, the leader, and poutine, the dish.

‘I need to be very clear about something. Poutine good, Putin bad,’ wrote one.

Exasperated Twitter users are also reminding people that there’s a difference between Putin, the leader, and poutine, the dish

Another wrote: ‘#Poutine is a delicious French-Canadian delicacy involving fries, cheese curds, and gravy. It brings joy to anyone who eats it. Vladimir #Putin is a toxically masculine genocidal maniac who brings pain and misery to people. Know the difference!’

‘People getting upset at restaurants because they don’t understand the difference between poutine and Putin is the latest example of us living in the dumbest timeline,’ griped one more.

‘Can’t believe people are actually mad about Poutine because they think the word sounds/looks like Putin. The depth of the foolishness has no end,’ tweeted yet another.

Even the Montréal tourism board has chimed in, sharing a Drake Hotline Bling Meme that shows the star rejecting Putin but approving of poutine.