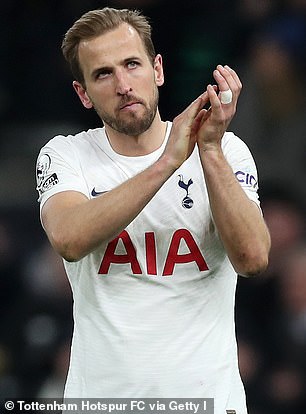 Harry Kane CAN break Alan Shearer’s Premier League scoring record, claim Ally McCoist and Harry Redknapp… as ex-Spurs boss insists they have ‘the best centre-forward in the world’ after he surpassed Thierry Henry

Kane, 28, has rediscovered his best form under Antonio Conte at Tottenham, scoring twice in their resounding 5-0 win over Everton on Monday night.

That double saw him move to 176 goals in the English top flight, meaning he has leapfrogged Arsenal legend Thierry Henry (175) in the all-time goalscoring charts.

The England captain is just one goal behind Chelsea great Frank Lampard, yet Shearer, who sits comfortably at the top of the pile, is still 84 goals away on a staggering 260.

However, McCoist believes Kane has what it takes to go on and surpass Shearer’s record if he remains injury free in the coming years.

‘It will be some achievement. He’s got to stay injury free, not wanting to tempt fate, but he has been prone to injury every now and again.

‘He’s recovered well to be fair. I always thought Alan would be quite comfortable sitting where he is even with Wayne Rooney, Aguero and people like that chasing him.

‘But I think he will be wary of Harry Kane. Harry Kane will be the first striker that has come along and Al will be saying ‘he’s got a chance’.

‘Time will tell, but it’s an incredible record he’s chasing but he could do it.

‘It will still be difficult and a lot of things still have to go his way, but he can do it.’

McCoists’ view was backed up by former Spurs boss Redknapp, who insists his old side currently have the best striker in world football at their disposal.

‘They’ve got the best centre-forward in the world in my opinion,’ Redknapp said.

‘Every chance [of catching Shearer]. He’s got absolutely everything, he’s a complete all-round player.

‘He’s a great professional, great lad to have around the dressing room as well as being out on the pitch.

‘He’s just a complete pro and you can’t speak highly enough of him. He had a blip earlier in the year and people were writing him off.

‘I couldn’t believe it as I know what he can do and he’s just different class. He can do everything.’