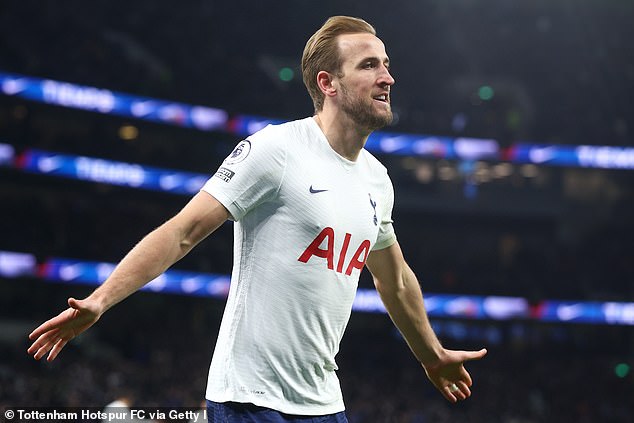 Harry Kane reveals his pride at surpassing Thierry Henry on the all-time Premier League goalscoring list after his brace against Everton, before insisting ‘I’ve got plenty more years in me’ to try to move past Alan Shearer’s tally of 260 goals

Harry Kane has revealed his delight at moving past Thierry Henry in the Premier League all-time goalscoring charts.

The Tottenham striker netted in either half during his side’s 5-0 thrashing of Everton on Monday night to take his overall tally to 176 top-flight goals, and he admitted his pride at overtaking the former Arsenal frontman.

‘Thierry was one of the greatest Premier League strikers we’ve seen, so to go above him now is a nice little milestone,’ Kane told Sky Sports.

He is now above Thierry Henry, who found the net 175 times in the Premier League for Arsenal

Kane is up to sixth on the all-time list, but is just one goal behind Frank Lampard.

He is still 84 goals adrift of Alan Shearer’s record of 260 goals, but the England captain has warned that he believes he has time on his side to surpass the ex-Newcastle forward.

‘I feel like I’ve got plenty more years in me, so hopefully I’ll keep ticking off those names, keep helping the team with my goals.

Kane still has a way to go to beat Alan Shearer’s 260 goals, but he’s hinted that it’s achievable

Tottenham are now just three points behind fourth-placed Arsenal, albeit having played a game more, and Kane has insisted that his teammates must embrace the pressure of being in the race for the final Champions League spot.

‘The top four has to be our ambition. We are not the finished article yet but the manager has had time to settle in and physically, I think we are in a really good position.

‘We are in there and in the mix and we have to feel that pressure, if we want to be a top team. We can’t hide from that,’ he added.

Antonio Conte’s side will travel to Manchester United on Saturday, hoping to build on their win against Everton, while also aiming to put a significant dent in the Red Devils’ chances of finishing inside the top four.