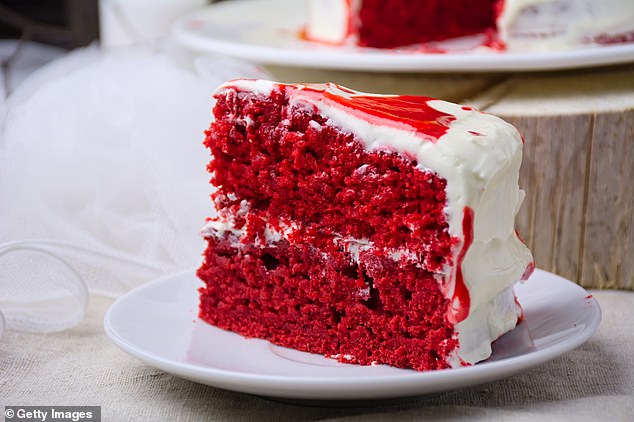 ‘An acquired taste lol, but hey, I like it’: Vegan restaurant tickles Twitter users with VERY honest dessert descriptions – including one in which owner admits, ‘I don’t get why this sells’

A vegan restaurant is Washington, D.C. is going viral for its delightful dessert descriptions, which don’t actually say anything about the recipes’ contents but rather give the owner’s honest opinion on each dish.

BDG’s Ghicken Vegan, in northeast D.C.’s Edgewood neighborhood, doesn’t have any social media pages of its own, but it’s currently earning quite a bit of attention on Twitter.

There, a screenshot from a delivery app is making the rounds, showing the restaurants unusual descriptions for each of its dessert offerings — which range from enthusiastic to lukewarm.

The descriptions don’t actually detail anything about the cakes, but give the owner’s opinions on each one

Interestingly enough, the restaurant’s entrees and sides were not given descriptions at all — but the ones for the desserts are quite funny.

Presumably written by the owner, each one gives a single person’s opinion on the various cakes that are available to order.

That seems to be a positive take, though not quite as enthusiastic as what is written for vegan red velvet cake: ‘Finally after years of practice. This is the best.’

For vegan strawberry cake, though, they wrote: ‘OK after even more years of practice this one is the best.’

They’re not quite as excited about the vegan key lime cake, writing: ‘An acquired taste lol, but hey, I like it and apparently a lot of others do too. Thank you.’

The vegan carrot cake is ‘sickening, is too good,’ with the writer adding: ‘I know you’ve had terrible carrot cakes in the past, but I am different.’

However, for vegan coconut cake, they wrote: ‘I do not like coconuts but a lot of people do. I do not get why this sells a lot.’

Twitter user Charlotte Shane was delighted enough to share, and other amused social media users have chimed in

The owner seemed to lose steam by the end of the list, and for vegan chocolate cake wrote only, ‘I am out of words.’

For vegan lemon cake, the description is just ‘lemon.’

It’s unclear how long the business has been open and how long those descriptions have been on Seamless, but on Monday, Twitter user Charlotte Shane was delighted enough to share.

‘These are the best menu descriptions I’ve ever seen. Sheer perfection,’ she wrote.

Her tweet has been liked over 88,000 times and earned thousands of retweets, with other users laughing at the menu.

‘New dating profile tagline – “I know you’ve had terrible carrot cakes in the past, but I am different,”‘ wrote one.

‘Ysing the key lime description as a response whenever someone asks me to tell them about myself,’ said another.

‘I’m obsessed with whoever runs this place,’ commented a third.

‘To be fair most lemon desserts really are just…lemon,’ tweeted a fourth person.