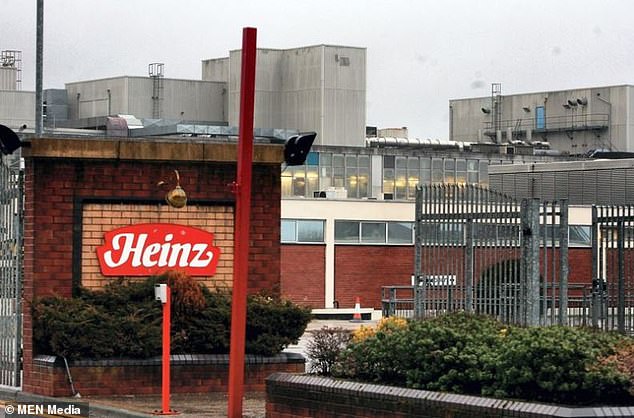 Unions force Heinz to abandon return of ketchup production to UK: US food giant pulls £140m funding for Wigan plant and will invest in factories in Poland and Spain instead after staff rejected new terms

US food giant Kraft Heinz has blamed union demands for its decision to pull a promised £140million investment from its Wigan factory.

The money would have brought ketchup production back to the UK and created 50 jobs at the food processing plant in Kitt Green, Orrell.

But instead the money will now be invested into sites in Alfaro, Spain and Pudliszki, Poland.

Workers’ union Unite slammed the decision and described it as a ‘disgraceful betrayal’.

Unite also asked Heinz for ‘cast-iron reassurances’ about the future of the site over fears the company could close down the facility entirely.

However the company hit back, saying workers had refused to accept ‘essential conditions’ which were already being met in the Spanish and Polish factories.

Heinz were planning at bringing ketchup production back to the UK following its departure in 1999 with a £140m investment in this plant in Kitt Green, Wigan

Joe Clarke, Unite’s national officer for the food and drink sector, said: ‘This is a disgraceful betrayal of this loyal workforce.

‘They were told to make sacrifices to receive this investment yet it has gone to Poland and Spain without any such demands being made.

‘Our members are reeling from this news so we are seeking immediate, cast-iron safeguards that the UK plant and jobs are secure.

‘We will not allow the UK workforce to be treated like this and Unite will fully support our members in any next steps that they wish to take.’

Mr Clarke added: ‘The millions of UK consumers, who purchase Heinz products, will be disturbed to learn that the workers who make their favourite products are being treated so badly by Kraft Heinz.

‘We will now instigate discussions with senior management at the company as to the future plans and investment for the Kitt Green site. The job security of the workforce is our priority.’

Kraft Heinz blamed the decision to distribute the funding elsewhere on a ballot that ‘rejected the package of measures and progress towards modernised working practices’ that the company claimed was ‘needed to underpin this investment’.

A spokesman added that these ‘essential conditions’ were already being met in the Spanish and Polish factories.

They said: ‘The proposals for Kitt Green had been fully recommended by all Unite stewards on site, including at National level given the significance of the investment, and the creation of jobs.

‘As a direct result of the ballot last year which rejected the package of measures and progress towards modernised working practices that was needed to underpin this investment at Kitt Green, we have re-evaluated the location to build additional production capacity for Sauces.

‘A decision has been taken for the current Sauces investment to be made in our Alfaro and Pudliszki factories based in Spain and Poland respectively. Whilst we can congratulate our colleagues in Alfaro and Pudliszki for this significant investment, it is disappointing that on this occasion the Kitt Green site was unsuccessful in securing this opportunity.

‘With this decision now made, we will continue with our focus and dedication in driving the improvements needed for us to continue our journey at Kitt Green to be exceptional in everything we do. With respect to our current and future investment plans at Kitt Green, we are working to ensure that the right level of investments continue to be made at Kitt Green which remains one of the most important facilities within our network.

‘As an ongoing process, the company will continue to evaluate the future growth across our various product categories and capacity gaps. Therefore, it remains important that Kitt Green is a possible option in the future when the need arises.’

Heinz had moved manufacturing of ketchup from the UK to the Netherlands in 1999.

Last July, in what was said to be a ‘strong vote of confidence’ in the UK as part of Boris Johnson’s ‘levelling-up agenda’ the firm were planning investing £140m in its plant in Wigan.

The Wigan plant at Kitt Green currently produces 1.3billion cans of food per year, of which 94 per cent is consumed here, including beans, soups and pasta.