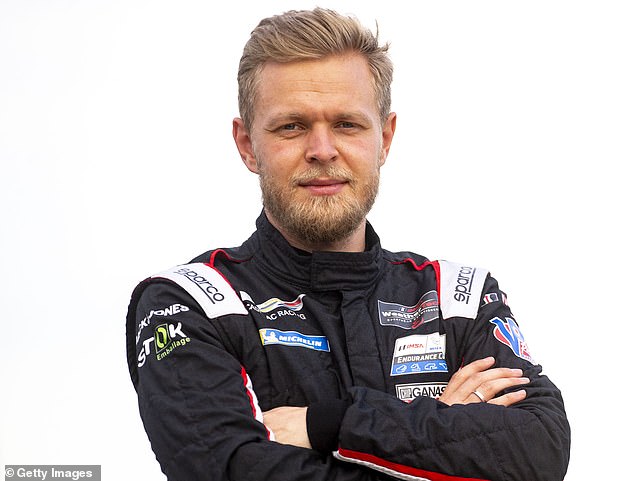 Kevin Magnussen has signed a multi-year contract with Haas to replace sacked driver Nikita Mazepin and admitted his surprise at being offered a pathway back into Formula One.

The 29-year-old has returned to his old team, where he made 79 starts across four seasons, following a season out of the sport.

Magnussen received the call from Haas after they fired Russian driver Mazepin last week and called for peace in regard to Russia’s invasion of Ukraine at the start of March.

Kevin Magnussen has returned to Haas, following a season out of Formula One

Speaking about his comeback, Danish racer Magnussen said: ‘I was obviously very surprised but equally very excited to receive the call from Haas F1 Team.

‘I was looking in a different direction regarding my commitments for 2022 but the opportunity to return to compete in Formula 1, and with a team I know extremely well, was simply too appealing.

‘I really have to say thank you to both Peugeot and Chip Ganassi Racing for releasing me promptly – both are great organizations. Naturally, I also want to thank Gene Haas and Guenther Steiner for the chance to resume my Formula 1 career – I know just how competitive they both are and how keen they are to return to competing week in and week out.

‘We’ve enjoyed a solid relationship and our positive association remained even when I left at the end of 2020. I’ve been briefed as much as possible on the development of the VF-22 and the potential in the package.

‘There’s work to do but I’m excited to be a part of it. I can’t wait to get back behind the wheel of a Formula 1 car in Bahrain.’

Magnussen, a veteran of 119 starts on the grid, will partner Mick Schumacher this season and join the German for testing this weekend in Bahrain.

‘When looking for a driver who could bring value to the team, not to mention a wealth of Formula 1 experience, Kevin was a straightforward decision for us,’ Haas team principal Steiner added.

‘Kevin was a key component in our previous successes – not least when we both scored our best finishes in Formula 1 back in 2018. He continued to show last year that he’s an elite race car driver adding wins and podiums to his resume.

‘As a veteran presence in both the garage and the engineering room, he’ll provide a solid benchmark for us with the on-going development of the VF-22. We’re all looking forward to welcoming Kevin back this week in Bahrain.’

Mazepin – whose father Dmitry is a part-owner of Haas’ former title sponsor Uralkali and an associate of Russian president Vladimir Putin – spoke for the first time since his dismissal earlier on Wednesday and did not rule out legal action against the American-owned team.

‘It is good to keep all (legal) options open. There was no legal reason that could enable the team to terminate my contract,’ he said.

‘I did not receive any hint, or any support, or be told that this is the decision we have taken. I learnt the same time as you did.

‘I lost my dream which I have been working towards for 18 years. I didn’t imagine the situation of losing my drive would happen so soon.

‘But I absolutely do not see Formula One as a closed chapter. I am going to stay in race condition and I will be ready to take on an opportunity if it comes.’