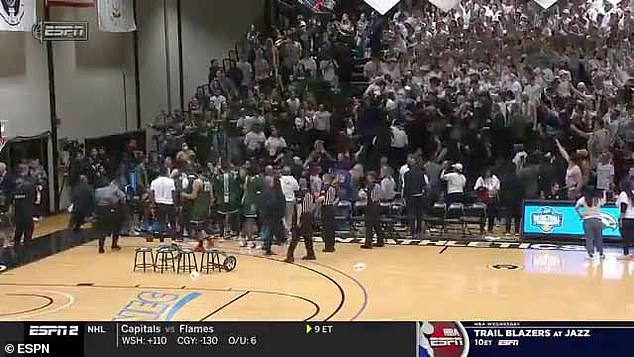 Fans were kicked out of a Northeast Conference Championship game and play was suspended for nearly half an hour after a wild fight broke out in the stands.

A brawl erupted near the student section of the stands during the title game between Bryant and Wagner at the Chace Atlantic Center on Tuesday in Smithfield, Rhode Island.

There were just 4.37 minutes left of play when the scrap kicked off behind the Wagner bench, leading to at least one fan getting escorted out of the building before play was allowed to continue, according to CBS Sports.

Video footage showed a huge crowd in the stands shoving each other as more people jostled to get involved, while drinks could be seen flying through the air after being thrown by fans. It is not known what prompted the altercation.

A brawl erupted near the student section of the stands during a title game between Bryant and Wagner at the Chace Atlantic Center on Tuesday in Smithfield, Rhode Island. Pictured: Players on the court as fight occurs in stands

There were just 4.37 minutes left of play when the fight (pictured) kicked off behind the Wagner bench. Pictured: Players standing on the court as the fight broke out in the stands

A man could be heard urging people to ‘return to your seats’ in an overhead announcement as players stood on the court and watched the scenes unfold.

Amid the tussle, commentators could be heard saying: ‘We’ve got a fight that’s broken out, up in the student section, and I don’t know if a Wagner player is up there but certainly some of them are trying to get there.’

It is understood that Wagner’s player Will Martin was ejected after attempting to run into the stands amid the chaos, while some of his teammates had to be restrained. No other players were ejected.

The skirmish appeared to have erupted between visiting Bryant and Wagner fans, USA Today reported.

Wagner’s coach Bashir Mason took his players to stand on the other side of the court when the fight kicked off, according to commentators.

Both teams were sent to their locker rooms while local police and officials attempted to get the situation under control – with play not restarting for nearly 30 minutes.

When both teams were allowed to return to the court, the game finished seemingly without any further incident.

At least one fan was escorted out of the building before play was allowed to continue. Pictured: Woman removed from the court by police

Speaking after the game, Bryant athletic director Bill Smith said he knew players needed to return to the court and ‘shake hands’ after the melee, adding: ‘I didn’t see any of it – how any of that thing started. All I knew is we needed to finish the game in a first-class manner.’

Mr Smith addressed the crowd after the brawl and laid out rules for after the game, saying Wagner players would have to leave the court before fans stormed it.

Bryant coach Jared Grasso described the game as ’emotionally charged’ and said there was nothing that could have been done to prevent the scrap, saying the Bryant gym doesn’t have a ‘natural barrier’ for the visiting fans.

He said he also resisted calls to clear the gym of all fans, saying some people had driven for ‘seven hours’ to be at the much anticipated game.

Bryant, who were firmly in the lead by 68-32 before the brawl kicked off, won the NCAA college basketball championship game with 70-43.

It is the first NEC title for Bryant, who earned an advance to play in the March Madness tournament after their victory.