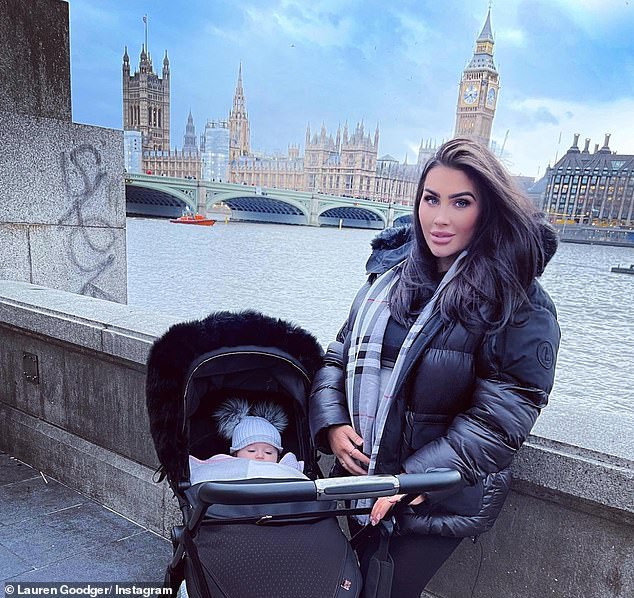 ‘There’s no way they will get back together’: Pregnant Lauren Goodger draws a line under stuttering relationship with Charles Drury as ex couple co-parent their baby daughter

Lauren Goodger has insisted she will not “get back together” with ex-boyfriend Charles Drury, despite the former couple raising two children together.

The 35-year-old reality star had been in an on-off relationship with builder Charles, 24, since 2020, but they split last year.

Lauren fell pregnant just eight weeks after giving birth to their daughter Larose in July 2021 – however insiders claim there is no way back for the pair.

Mot happening: Lauren Goodger has insisted she will not “get back together” with ex-boyfriend Charles Drury, despite the former couple raising two children together

A source told OK! magazine: ‘Lauren and Charlie are co-parenting at weekends. Sometimes he’ll pop in during the week and see Larose, but there’s no way they’ll get back together now.

‘Too much has happened and Lauren doesn’t want to disrupt Larose’s life – that’s her priority.’

The former TOWIE star briefly split from Charles back in November 2021 and explained that “a lot went through [her] mind”, but ultimately decided to go through with the pregnancy when he urged her not to have a termination.

She said previously: ‘A lot went through my mind which is why I’ve held out a bit longer until I’ve announced it. Charlie was like, “I really want this baby.” And I said, “So do I.”

Stuttering romance: The 35-year-old reality star had been in an on-off relationship with builder Charles, 24, since 2020, but they split last year

‘I made the decision to go ahead with it and I’m so glad I did. We had that little break [in November] and he came back and was like, “You’re not having a termination – I want this family.”‘

She added: ‘I knew deep down I was going to go ahead with it, but I was scared. I’ve got to think of Larose too.

‘But if I had a big gap between children, I’d get myself sorted, Larose in a good routine and then I’m back to square one. I might as well do it now when I’m in new baby mode.’

Lauren dumped Charles when he admitted to sleeping with Instagram model Amy Gilbert while they were on a break, leaving the relationship “up in the air”.

She said: ‘Last week I was like, “This isn’t happening right now.” It’s a really funny stage – we’re doing our own thing. It’s been a rocky time and it’s been really hard for me.

‘But I’ve got to focus on the pregnancy and the baby. I’m a very hands-on mum, it’s all on me, so it doesn’t feel much different. I’m here on my own with my mum and my baby.

‘Charlie’s really hurt me so I don’t know what the future holds. At the minute it’s all up in the air. We need to get a co-parenting schedule together.’