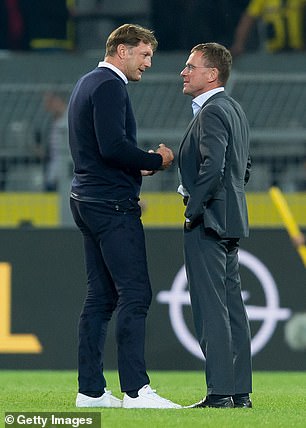 Ralph Hasenhuttl says he is not giving any time to suggestions he could be a contender for the Manchester United job.

Southampton manager Hasenhuttl has been touted for the role having led Southampton to the top half, with the Saints currently ninth in the Premier League after a strong run of form.

The Austrian reportedly impressed Old Trafford chiefs with his results against United this season and also their neighbours Manchester City, holding both clubs to two draws.

At RB Leipzig Hasenhuttl also worked with Ralf Rangnick who is currently United’s interim manager, so the pair already know each other well.

Rangnick is set for a consultancy role at the end of the season and will have a say in who lands the job permanently.

Hasenhuttl said: ‘When I discuss every list I have been on in the last two months, I would not have time any more for working or doing my job.

‘The only thing I can say is it shows that we don’t do everything wrong here.’

However, the 54-year-old faces competition for the job with former Saints boss Mauricio Pochettino and Ajax’s Erik ten Hag the front runners.

But should the United hierarchy fail to land either, they would be open to switching to pursuing Hasenhuttl.

Like Pochettino, Hasenhuttl has cut his Premier League managerial teeth at St Mary’s and the Mirror reports he would be open to a move to a bigger club.