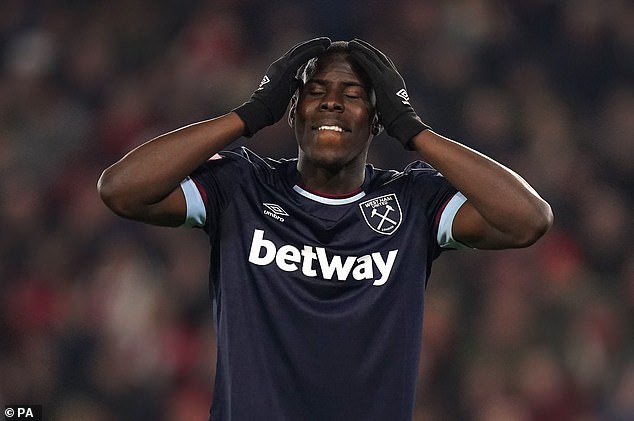 The RSPCA are close to concluding their animal cruelty investigation into Kurt Zouma’s cat kicking episode with West Ham bracing themselves for the defender to be prosecuted.

The France international – and his brother Yoan – are both under investigation after footage emerged on social media of the Hammers star kicking a cat.

Animal welfare charity the RSPCA seized the pet as part of their probe looking into the evidence of the abuse.

And it is understood that the RSPCA are now approaching the end their investigation with both West Ham and Dagenham and Redbridge, who Yoan plays for, expecting the pair to face sanctions.

In the video that emerged last month, the former Chelsea defender is filmed by his sibling kicking the animal.

Sportsmail contacted the RSPCA who responded to say they could not provide an update at the moment.

West Ham and Dagenham and Redbridge, who Yoan (above) plays for, are expecting the pair to face sanctions

Depending on the evidence produced from the investigation, any move to prosecute Zouma could force West Ham into further disciplinary action. Zouma has already been fined two weeks wages.

Manager David Moyes has continued to select Zouma in the face of the controversy but it now remains to be seen how he responds in the event of Zouma being prosecuted.

Likewise, Yoan has been suspended Dagenham and Redbridge during the RSPCA’s investigation and could now face an even longer spell on the sidelines.

Kurt Zouma also saw his Adidas contract terminated in the aftermath of the footage emerging.

The German sportswear firm, however, has faced a huge backlash for dropping the Hammers star.

Social media has been awash with similar assertions that’s Adidas’ decision to drop him as a client – has racist undertones.

This week Adidas suspended – but didn’t terminate – their partnership with the Russian Football Union as a consequence of the nation’s invasion of Ukraine.