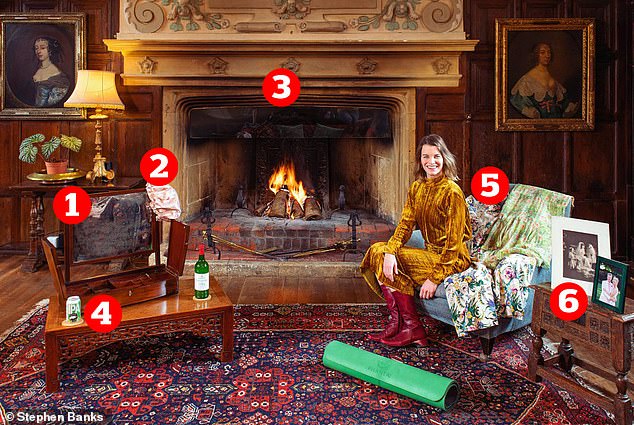 My haven, Julie Montagu: TV presenter and yoga instructor Viscountess Hinchingbrooke, 48, in the hall of Mapperton House in Dorset

By Andrew Preston For Weekend Magazine

1. HOME AWAY FROM HOME

Coming here as an American, then marrying into the aristocracy, meant I was an outsider twice over.

I’m not an English rose, and after 20 years I still have my American accent and don’t feel I’ve changed, apart from being respectful to the wonderful family I’ve married into and to their traditions.

But I hope I’ve helped to put Mapperton on the map. I really like 18th-century furniture and want to add a few pieces to the house, like this George I mirror I found in an antiques shop in Bridport for £300.

I used to think people who swam in the sea near here were bonkers, but now I swim all year round in a rectangular pond in the garden, wearing this cap. There are frogs and all sorts in there, but I prefer that to water with chlorine.

In the winter, when you first get in you want to jump right back out, but now I stay in for up to five minutes, and you come out feeling unbelievably invigorated. My husband Luke [son and heir of the Earl of Sandwich] says I’m like the Energizer Bunny.

This spectacular fireplace, which dates from 1604, is one of at least 18 in the house and it’s the biggest and best. Although we have a biomass boiler I still feel the house is cold, so I love to do my yoga here.

Since having my fourth child I’ve also run a yoga school. I’m an optimist, I think projects keep you young and inspired, whether or not you succeed or fail.

I grew up in the Midwest in a Chicago suburb, in the middle of corn fields, so when I saw my local Co-op stocked the Goose Island Brewery beer that I grew up drinking I thought, ‘You’re kidding me.’

I’m a beer girl through and through, and even if I go to posh dinner parties I take my own beer with me. Also on the table is a bottle of juice, from the 350kg of apples from our orchard that I decided we should pick and press during lockdown.

I’ve never been much into fashion labels and famous designers – I can’t even pronounce half their names, so why bother? I’m very into vintage clothes instead, and I’m a real bargain hunter.

This gold dress I’m wearing was from a second-hand shop, and on the chair are two 1930s dresses. I look better in those types of dresses and their imperfections tell a story, even though you might have to get a stain removed or a hole repaired.

I only recently found out that the tiara I wore to my wedding in 2004 was also worn by Alberta Sturges, the 9th Countess of Sandwich, who was my father-in-law’s grandmother. She too was from Chicago.

She came over to England during the so-called Gilded Age and married the Earl of Sandwich in 1905 [left]. She was also a devotee of yoga.

Researching her has made me feel more content and more grounded knowing that another American did what I have done and did it successfully!

As told to Andrew Preston. Julie’s series An American Aristocrat’s Guide To Great Estates is available on My5. Visit Mapperton.com or @Mapperton_estate on Instagram