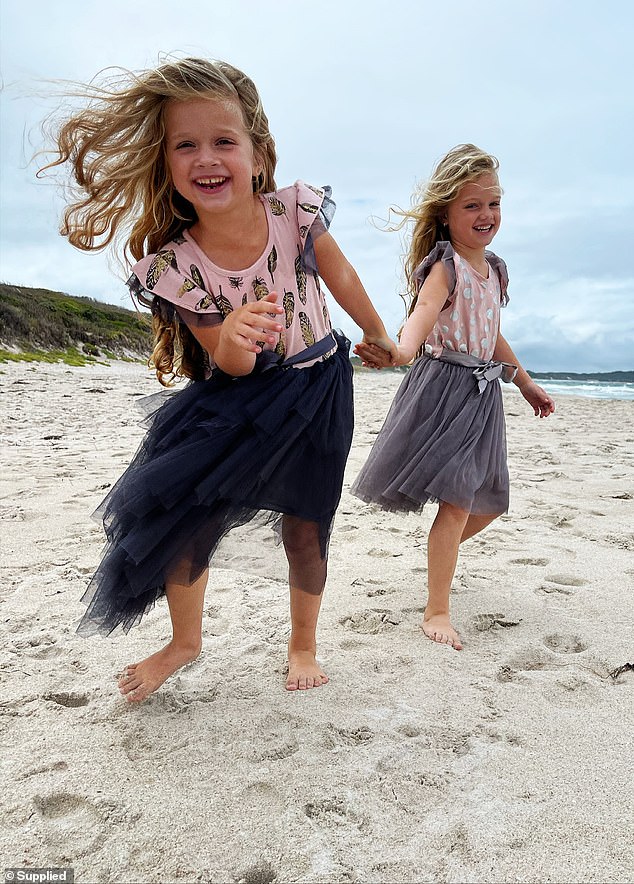 An Australian mum who conceived her second daughter eights days after falling pregnant with her first ‘cried tears of both shock and joy’ when she found out.

Jo, from Bunbury Western Australia, got the surprise of her life during her third pregnancy when she found out she would be having two babies – especially as twins don’t run in either her or her husband’s families.

Anyone who has met her six-year-old daughters, Ruby and Khloe, would assume they were twins, but they’re actually the result of a very rare phenomenon known as superfetation with only a handful of known cases in the world.

Twins Ruby(left) and Khloe (right), both 6, were conceived eight days apart and had two separate due dates in a rare phenomenon known as superfetation

Despite their differing due dates, Ruby and Khloe decided to come into the world seven weeks early and only six minutes apart

During an early scan in Jo’s pregnancy, it was discovered that the now 30-year-old mum was not only carrying one but two babies with different conception and due dates because of their differing sizes and development stages.

In a medical sense, the girls aren’t technically considered twins but, as they shared a womb and have the same birthday, Jo refers to them as such.

‘I had no idea it was twins – it definitely doesn’t run in either of our families,’ the mum-of-five, who conceived the girls naturally, told FEMAIL.

Superfetation is extremely rare and happens most often to women who are undergoing fertility treatment.

Firstly, an already pregnant woman releases a second egg. This is then fertilised by sperm despite hormones being released during pregnancy which would usually block the male reproductive cells from reaching the uterus. Lastly, the fertilised egg has to attach itself to the uterine lining.

In most cases, the hormones released in a woman’s body during pregnancy prevents all three events from happening.

It was a traumatic birth, Ruby was born breathing whereas Khloe had to be resuscitated

When she received the unexpected news, Jo said she had to make some radical changes.

‘We had to get a new house, new car and all that and we were only in a small three bedroom house with the older two.’

Despite their differing due dates, Ruby and Khloe decided to come into the world seven weeks early and only six minutes apart.

It was a traumatic birth, Khloe wasn’t breathing and had to be resuscitated.

The girls, who were in hospital in Perth for a month before being transferred to Bunbury hospital for a couple of weeks, have since grown up happy and healthy with their three other siblings.

Jo said Ruby, who was conceived and born first, was always the taller one until Khloe had a growth spurt.

‘Ruby was bigger until they were about two or three, that’s when Khloe shot up – she takes after her father who’s 6’3″,’ Jo said.

‘They are polar opposites in everything but they still don’t like being away from each other.’