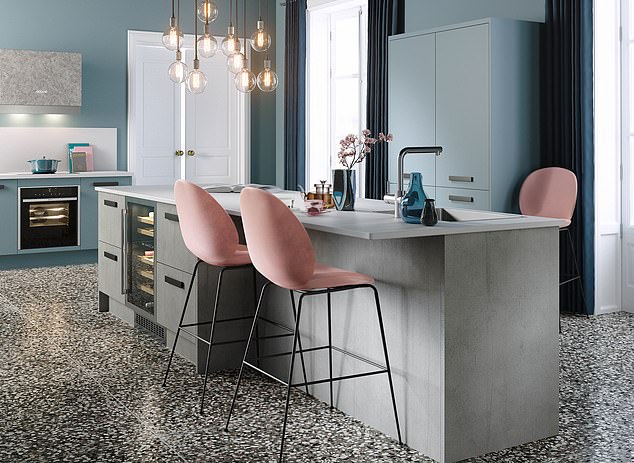 Banish any images of concrete tumbling inside a mixer ready to be poured. Industry’s most useful material is now enjoying a dramatic — and surprisingly colourful — reinvention.

Architects have long appreciated its unfussy aesthetic — Rome’s 1,900-year-old Pantheon was created from an early version — and the Brutalist movement used concrete for monolithic buildings in the 1960s.

The cement, aggregate and water mix is gloriously tactile when set — and, if polished, cool to the touch and bowling ball-smooth.

True grit: A concrete kitchen island. If polished, concrete is cool to the touch and bowling ball-smooth

The downsides? Concrete is heavy and, in its raw form, has the most gloomy of hues.

But thanks to a handful of British companies it’s set to become the material of the year, and used to create statement interior pieces in a rainbow of bold colours.

Tim Bayes is founder of Kast, which sells elegant, high-end basins in 28 eye-popping shades. After art college in the UK, Bayes began experimenting, mixing concrete in his South London back garden before placing an ad in Elle Decoration magazine offering bespoke products.

More than two decades on, Kast focuses solely on sculptural sinks, often with an Art Deco slant, that are light years away from traditional rough, grey concrete.

On-trend earthy tones such as Wheat, Ember and Brick are set to be 2022’s most sought-after shades.

In its most basic form concrete may be cheap, but a painstaking production process puts Kast at the higher end of the market.

Its least expensive sink, the Terra, costs a wallet-wincing £1,075, although Bayes defends this, saying. ‘They’re all hand-cast.’

Interior designer Harriet Forde, a past president of the British Institute of Interior Design, says concrete is versatile enough to use in every room of the house, in everything from sanitaryware to concrete lamps, tables and planters.

Skim floors with a thin layer of micro-cement instead, it costs about £125 per square metre for a 3mm top surface on stairs, walls and floors — but imitates full concrete perfectly.

And sophisticated printing technology means tiles and even wallpaper can do a fine impression of concrete.

Before you fall head over heels for the idea of a concrete kitchen, remember the material is often prohibitively heavy in larger pieces, so faking it might be more practical.

Laminate work surfaces aping its texture and colour are readily available. Ikea has two shades, retailing at £60 for 2.5 m. Or plump for a table with a micro cement finish.

‘Micro cement has enabled anything to be covered to look like concrete,’ says Forde. ‘It will instantly create a monolithic industrial look that is lighter in weight.’ Living Concrete’s 2 m concrete-surfaced dining table costs £3,840.

Concrete sanitaryware is hardy too; once sealed and with the right maintenance, it should see its 20th birthday and beyond. A Bron concrete basin in Iris from Formed Concrete Basins is priced at £2,400.

Adding a concrete showpiece — such as a coffee table — is one way to embrace the trend without your home looking too industrial.

The high Street — from Primark to Selfridges — is awash with budget-friendly concrete planters, lampshades, clocks and candelabras, often in punchy colours or daubed with metallic paint. Oliver Bonas has a Vico Concrete Lamp for £36 in terracotta.

Savings of the week! Faux plants

There are just nine days to go until the first day of spring — so why not mark the occasion by adding foliage to your home?

But real greenery can be tricky if you struggle to keep house plants alive.

Luckily, the faux alternative can appear as leafy and glossy as the real thing. And you can save as much as 50 per cent on large pieces at the moment.

This plant remains fashionable, but the ficus or weeping fig is fast gaining a following.