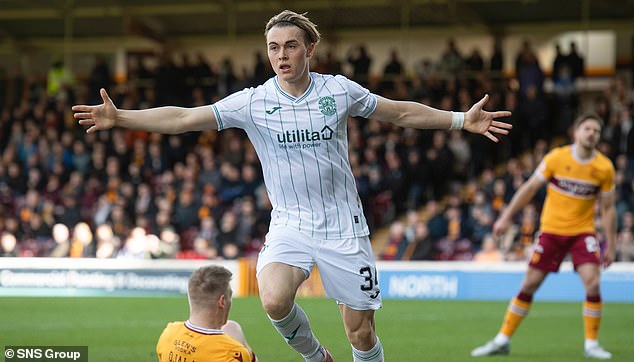 Motherwell 1-2 Hibernian: Norwegian teenager Elias Hoff Melkersen bags a brace to fire Shaun Maloney’s side into the semi-finals of the Scottish Cup… as beaten hosts have Bevis Mugabi sent off after just 48 SECONDS

By Nathan Salt For Mailonline and Pa Reporter

Motherwell defender Bevis Mugabi was sent off inside the first minute as Hibernian won 2-1 at Fir Park to reach the Scottish Cup semi-finals.

Elias Melkersen marked his first Hibs start with two first-half goals – both set up by Sylvester Jasper – as the Leith side joined Edinburgh rivals Hearts in the last four.

Motherwell made a game of it after Joe Efford scrambled home late in the first half but they never carved out a real chance to force extra-time.

Backed by a buoyant away support, Shaun Maloney’s side struck twice to win at Fir Park

Mugabi was one of four natural centre backs in a revamped Motherwell team featuring two midfielders and three forwards.

The Uganda international lined up at wing-back and launched himself into a challenge on Josh Doig with 48 seconds gone. His studs brushed the ball before landing on the defender’s lower leg.

Collum was beseeched by the visitors to show another red card five minutes later when Jordan Roberts lunged in late on Drey Wright but the referee produced a yellow.

Wright was moved to left wing-back after shaking off the effects of the challenge as Doig limped off and Chris Mueller came on.

Wright soon came close with a volley which goalkeeper Liam Kelly did well to push away.

Motherwell had a chance to take the lead following a corner but Matt Macey clawed away Juhani Ojala’s effort and Roberts missed the ball from the second phase.

Hibs, who had Macey and Joe Newell back in the team but were missing Jake Doyle-Hayes, opened the scoring in the 15th minute. Jasper rode Nathan McGinley’s weak challenge and whipped in a cross which Melkerson headed home at the near post.

Jasper and Ewan Henderson continued to cause Motherwell problems with balls into the box and the visitors went two up in the 37th minute after the on-loan Fulham winger played a long diagonal over the top. Melkerson got away from Ojala and finished into the far corner.

The hosts got a lifeline in the 43rd minute when Roberts let fly with an ambitious effort and Efford chested the ball in off the post.

There was still time for plenty more first-half action. Wright and Chris Cadden threatened after Hibs corners and Melkerson looked like he might get his hat-trick but could not connect with Mueller’s cross, before Efford had a shot blocked on a promising break.

He trudged off down the tunnel and with a man less, Motherwell found it tricky to take control

The start of the second half was a more cagey affair with Motherwell realising they had to stay in the game and look to make the most of any chance that came their way.

Jasper was booked for a penalty-box dive and Kelly saved from Mueller before Liam Donnelly drilled just wide from 25 yards at the other end.

Macey got away unpunished for elbowing Ricki Lamie in the stomach after the Hibs goalkeeper had been fouled at a set-piece as Motherwell began to press the visitors back, and Donnelly headed not far off target from 18 yards.

Hibs got a bit more control of the game and Christian Doidge had a header saved but Motherwell worked a half-chance after turning the ball over in the Hibs half. Substitute Kaiyne Woolery fired beyond the top corner with Kevin van Veen appealing for a ball across the face of goal.

Well could not make the most of some late set-pieces as Shaun Maloney’s men held on.