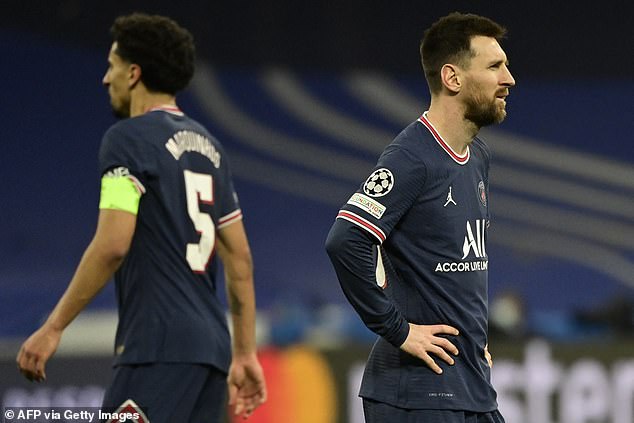 PSG ultras have called for the club’s president Nasser Al-Khelaifi, as well as sporting director Leonardo,  to resign from their positions after the side’s latest elimination from the Champions League.

The Ligue 1 giants looked on course to reach the last eight of Europe’s elite club competition on Wednesday when they held a two-goal aggregate advantage over Real Madrid. However, they collapsed in the second half of the second leg and were knocked out thanks to a Karim Benzema hat-trick.

PSG added a number of household names to their squad last summer, such as Lionel Messi, Gianluigi Donnarumma and Sergio Ramos, but it has not paid off. The club’s ultras feel change is needed after questioning the club’s policy of buying star players who do not work together as a cohesive unit.

Frustration was shown at Leonardo during Paris Saint-Germain’s 3-0 victory against Bordeaux.

A banner was seen in the stands saying ‘direction demission’ – calling for a resignation.

Another banner read: ‘Mbappe A Paris, Leonardo Au Pilori,’ urging the striker to stay at the club, while insisting Leonardo should be at the pillory.

‘The unacceptable and inevitable disappointment that we feared and foresaw has unfortunately come to pass,’ the Collectif Ultras Paris group wrote in an open letter, as quoted by Goal.

‘How can you have the mindset to move mountains when your season seems to begin in February and you play domestic competitions at a pedestrian pace?

‘How can you have a genuine game plan when your squad is nothing but a bunch of “stars” who barely complement one another?

‘How can a coach be the respected leader of the changing room when he is clearly not the true decision maker?

‘How can you rebuild a squad when eternal substitutes can happily see out their contracts with such comfortable salaries?’

The ultras have acknowledged that Al-Khelaifi deserves credit, having overseen PSG’s dominance of French football in recent years, which has seen the side win seven Ligue 1 titles since he began his role in 2011.

However, they no longer feel that he is the man to take the club forward.

‘We don’t have a short memory. We know what our return owes to president Nasser Al-Khelaifi but it is clear he is not the man for the job.

‘The club’s current situation requires complete reorganisation at all levels going forward and the daily presence of its president,’ the statement added.

The pressure appears to be building on Al-Khelaifi, just days after he reportedly threatened a Real Madrid employee and entered the referee’s changing room following PSG’s dramatic European exit.

UEFA have opened disciplinary proceedings against him as they investigate whether he needs to be punished for his actions.