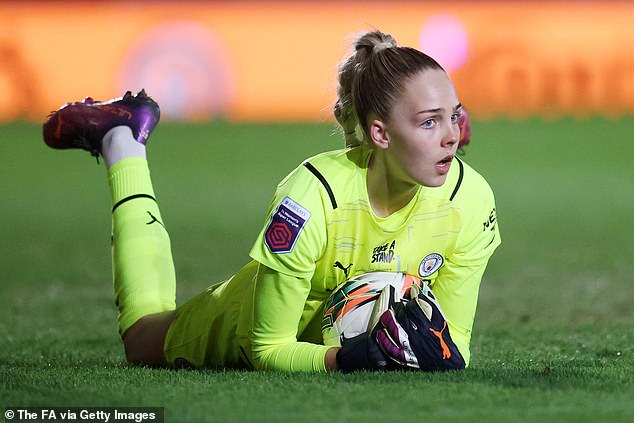 Brain injury charity repeat calls for temporary substitutes after Man City Women goalkeeper Ellie Roebuck was cleared by medics to play on after suffering a suspected concussion, before she was taken off as a ‘precaution’ 15 minutes later

Roebuck suffered a blow to the head when she was clattered by Ashleigh Neville in the 69th minute but was allowed to carry on playing after being checked by medics.

However, 15 minutes later the keeper went down again and was eventually substituted. City boss Gareth Taylor said Roebuck was suffering from clouded vision in her right eye and was taken off as a precaution.

He said: ‘She had a couple of contacts, she took one in training yesterday in a clash with Bunny Shaw. We needed to make sure that she was safe in that respect. She had a little bit of clouded vision in her right eye so we couldn’t take the risk.

‘She took a bit of a facial knock to the head yesterday but I think that was just a graze. Our doctors and medics will make sure that she’s checked over properly. I think when you have that you never know if it’s concussion or not so why take the risk, we just had to take her off.’

Headway believe the incident is another example why temporary concussion substitutes – when a player is replaced for 10 minutes and assessed in private – should be introduced.

Luke Griggs, Deputy Chief Executive of the charity, said: ‘From the footage available and the manager’s post-match comments, it seems clear that there was a suspicion that the player may have been concussed in the initial collision with Ashleigh Neville.

‘While we agree with Gareth Taylor that there should be no risks taken in such circumstances, the question remains as to why it took 15 minutes for the player to be substituted?

‘If temporary concussion substitutions had been possible, those fifteen minutes could have been better utilised by medics in the quiet confines of the treatment room to give any potential concussion symptoms time to manifest, rather than the player remaining on the pitch at risk of further collisions.

‘It’s yet a further reminder of why temporary concussion substitutes should be introduced to the game without further delay to help safeguard football, and its players, for the future.’

Permanent concussion substitutes were introduced in 2021, with clubs able to make two additional changes if a player is deemed to be suffering from concussion.

The FA’s concussion protocols read: ‘At all levels in football, if a player is suspected of having a concussion they must be immediately removed from the pitch, whether in training or a match.’