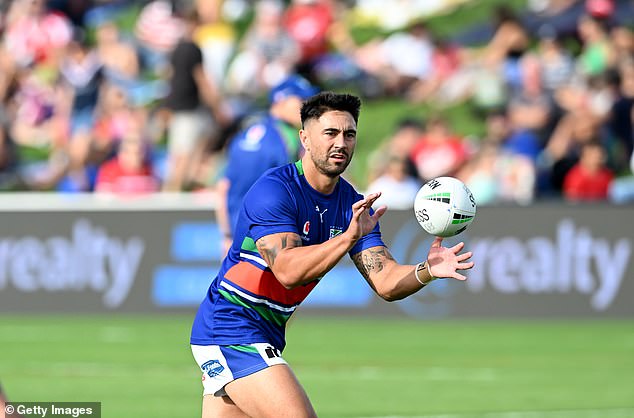 Shaun Johnson’s return to the Warriors has been halted with the leading NRL halfback facing up to a month on the sidelines with a pectoral injury.

Johnson became the third Warriors player in the casualty ward following their season-opening loss to St George Illawarra on Saturday.

The 31-year-old halfback has suffered a minor strain which is expected to keep him out of action for up to four weeks.

It’s a massive blow for the Warriors with Johnson, in his first match for the club in more than three years, having a hand in each of their three tries in their 28-16 defeat.

Watene-Zelezniak broke his left thumb in the opening minutes of Saturday’s encounter but still played 80 minutes and managed to score a first-half try.

The 26-year-old will have surgery and is likely to be out for six to eight weeks.

Teenager Vailea, playing his third NRL match, also lasted 80 minutes despite a first half knock to his knee.

Meanwhile, Penrith enforcer Moses Leota will miss at least eight weeks after fracturing his shoulder during their round one victory over Manly.

Scans on Monday confirmed the prop fractured the glenoid in his left shoulder in the final minutes of their 28-6 win in the season opener.

The Panthers said he was set for a long stint on the sidelines.

‘The affected area is the shoulder socket component of the scapula, which means the 26-year-old will commence a rehabilitation program and be sidelined for 8-10 weeks,’ the club said in a statement.

Spencer Leniu is likely to come into the starting side against St George Illawarra on Friday night at Netstrata Jubilee Stadium with Matt Eisenhuth set to move on to the bench.