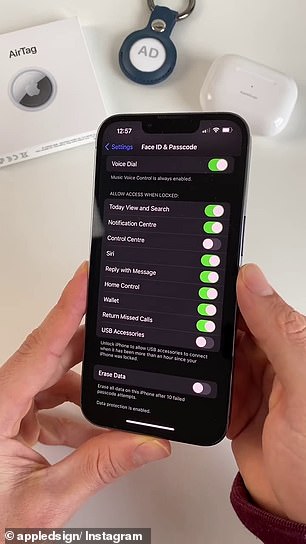 An Apple expert has revealed a simple hack that allows iPhone users to track their device even when it is turned off or set to airplane mode.

Niels van Straaten, better known as @appledsign on Instagram, detailed the trick in a video on his account, in which he took his followers through a quick series of steps in order to make the hack work.

First, Niels went to ‘Settings’ and then ‘Face ID and Passcode.’ He then toggled off access to the control centre and USB accessories when the phone is locked – which will prevent thieves from ever switching the phone to airplane mode.

‘The first thing a thief would do is toggle on Airplane Mode to disconnect from the internet,’ he notes.

Airplane mode is often used by thieves in order to prevent a person from tracking or accessing their device once it has been taken. Typically, this mode can be activated when a phone is locked, however Niels’ trick prevents that from being done.

Niels van Straaten, better known as @appledsign on Instagram , has shared a hack that lets users track their iPhones even if it is turned off or on airplane mode

Should that step fail however, he asked users to ensure that ‘Location Services’ is always on,

The ‘Find my iPhone’ section has three subsections – and Niels warned that people usually only have the first setting toggled on.

‘It’s important to have ‘Find my network’ and ‘Send last location’ on as well,’ he said.

These settings lets users locate their iPhones when it is offline, in power reserve mode, and even after power off. It will also share the phone’s location with Apple when the battery is critically low.

These settings lets users locate their iPhones when it is offline, in power reserve mode, and even after power off and will also share the phone’s location with Apple when the battery is critically low

The video has over one million views and thousands of comments, many of which share useful tips that help users keep their phones secure.

‘Make sure to turn of Siri when the phone is locked,’ one man commented. ‘She turned airplane mode on without me having to use the control centre.’

‘People think leaving your location on drains your phone’s battery but this is not true,’ added another. ‘Better to be safe than sorry.’