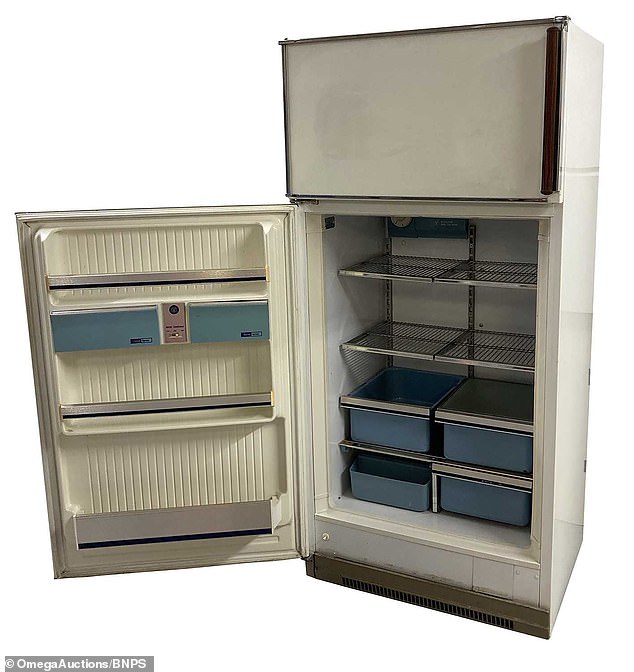 Please FREEZE me! John Lennon’s 1968 fridge-freezer from his Surrey mansion is set to fetch £2,000 at auction (and it still works)

John Lennon’s fridge-freezer from his Surrey mansion has emerged for sale – and is still in working order.

The Westingland kitchen appliance was said to be the ‘Rolls Royce’ of fridges when it was bought by the Beatle for his Kenwood home in the 1960s.

It was then acquired by Billy Atkins who bought the country house from Lennon in 1968.

The famous white appliance, which is a large fridge with a smaller freezer compartment on top of it, served the vendor well for decades.

The item is coming up for sale at Omega Auctions of Newton-le-Willows, Merseyside, where it has been given a pre-sale estimate of £2,000.

It retains its original metal drawers, ice cube trays, and even the original instructions.

It was recently shown to the son of Lennon’s old housekeeper, Dot Jarlett, who spent much of his childhood at his home and ‘instantly recognised’ the fridge.

Dan Hampson, auction manager at Omega, said: ‘This is certainly the most collectable household item we have ever offered for sale.

‘As well as the excellent provenance and the added bonus of it having been used in John Lennon’s famously cool Kenwood home, we think that it’s quite a stylish fridge too.

‘We are offering an original set of 1960s Eero Saarinen designed chairs in the same auction which also came from Kenwood so it is quite the opportunity for someone to furnish their home in the Lennon style.

The fridge retains its original metal drawers, ice cube trays, and even the original instructions

The famous white appliance, which is a large fridge with a smaller freezer compartment on top of it, served the vendor well for decades

‘The Westingland was in its day the Rolls Royce of fridges.

‘It was bought by the vendor directly from his friend Billy Atkins who became the owner of Kenwood in early 1970 after John Lennon sold the property in late 1968.

‘Whilst at the property for a barbecue in 1970 the vendor mentioned that his fridge had packed in and Billy offered him the Westingland.

‘After some bartering, the vendor bought it for around £80. He has owned it ever since and it was working up until a few years ago [when it was last plugged in].’

He added: ‘The fridge comes with two letters of provenance from the vendor and his friend who helped him collect it along with a letter from Dot Jarlett’s son confirming that it came from Lennon’s kitchen.’

The fridge will be sold on March 29.