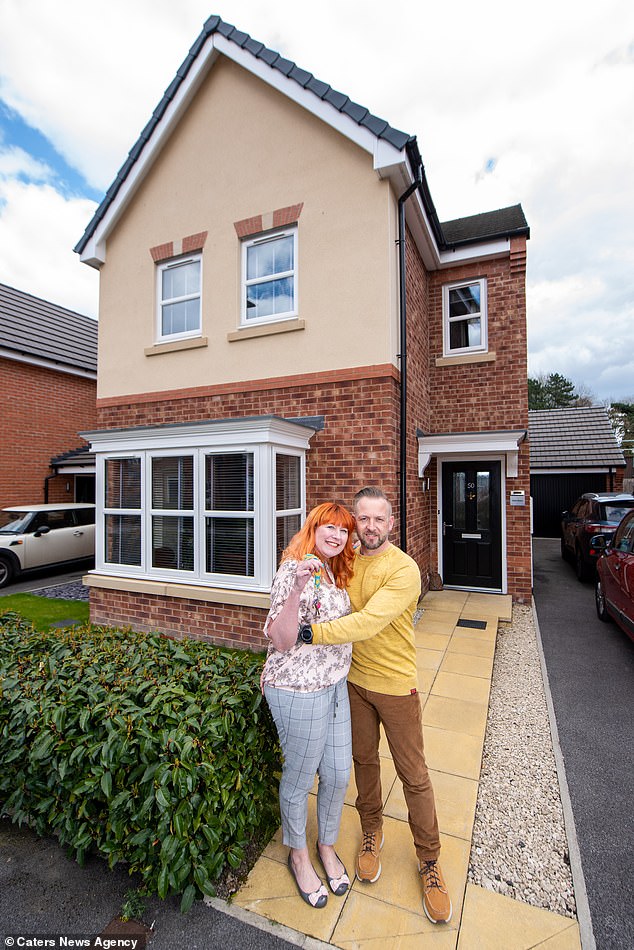 A married couple who have lived in separate houses for their entire 20-year relationship have finally decided to move in together.

Claire Burke, 54, and her husband, David, 48, from Bradford, previously lived apart because they believed having their own space made their relationship stronger.

Claire says that living on her own meant that she missed her husband and always looked forward to seeing him.

But after two decades of living separately, the couple have finally purchased their first home together in Weatherby and say they plan to remain under one roof forevermore.

However, they’ve not fully given in to convention and still sleep in separate bedrooms because they are used to their own space after two decades living apart.

Claire Burke, 54, and her husband, David, 48, from Bradford, lived in separate houses for their entire 20-year relationship but have finally decided to move in together. The couple are pictured outside their new home

The couple, pictured inside their new home, previously lived apart because they believed having their own space made their relationship stronger

‘I liked the feeling of not having anyone to answer to and felt like I had achieved so much by having my own house, I was nervous about losing that,’ said Claire.

‘Neither David or I had lived an independent life before and we felt like we both needed that.

‘I didn’t ever want to become the nagging wife, and living separately meant we avoided arguments that most couples have.

‘It just worked perfectly for us.’

The couple, pictured on their wedding day in 2013, have been married for eight years and together for 20 years in total

After much deliberation after receiving a new job, David put his house on the market. He is pictured standing outside of his old home in 2017

The couple, who have been married for eight years and together for 20 years in total, moved from Bradford and bought their first home together in Weatherby, West Yorkshire, after David, a firefighter, was offered a new job as crew manager there.

After months of weighing up the pros and cons of moving into a house together, Claire says that they decided to bite the bullet after it finally felt like the right thing to do.

Claire added: ‘We started talking about moving in together around this time last year when an amazing opportunity came up for David at work.

‘However, the new job was at Weatherby Fire Station, so initially I wasn’t too keen because I thought it was too far from where we were, in Bradford.

‘There were lots of negatives and positives to the situation. The wage was tempting and we would have rather our son, Jay, who has Down’s syndrome, went to secondary school in Weatherby rather than Bradford.

‘However, the house prices were so expensive there was so way we could have afforded to have two houses.

‘We considered various options, such as one of us buying a house and one of us renting.

The couple said part of their decision to move was because they would rather their son Jay, who has Down Syndrome, went to secondary school in Weatherby rather than Bradford

Pictured, Claire, David and Jay Burke in Claire’s old home in 2017 before the couple moved in together in Weatherby

‘Months passed and we had considered all of the pros and cons to the situation. David was keener for us to move in together at first, whereas I was far more cautious towards it.

‘I was scared I might not be able to cope with living together, or I might resent him for it after being so used to having my own space.

‘I loved him so much, I didn’t want to risk losing him and ruining our marriage because we had decided to move in together.’

She added: ‘I sold my house within six hours. It just seemed like everything was pointing us in the direction of moving in together in Weatherby, so we decided to bite the bullet and go for it. It just felt right.

‘And earlier this year we eventually moved in together.

Claire, pictured inside their new home, admits to being overcautious about them living together because their previous arrangements had worked so well for them for the past 20 years

The couple, pictured embracing in the doorway of their new house, admitted they were ‘terrified’ before moving in together

‘It has been brilliant so far. We don’t regret it all and we think it really was the right next step for us after all these years.

‘I have been surprised at how unbothered I am by David’s little quirks that I thought would annoy me. Such as him leaving his underpants on the floor or not rinsing the bath after he has used it.

‘I’m happy that I am more tolerant than I thought I would be.’

After David was ready to move in with his wife for a while, Claire admits to being overcautious about them living together because their previous arrangements had worked so well for them for the past 20 years.

She says she was terrified the change would cause arguments between them and potentially result in the end of their marriage.

The NHS administrator said: ‘I have been completely taken aback by how well it has gone.

‘It has brought us closer than we have ever been and it has changed me for the better.

Claire, pictured with David outside their new home, says she was ‘completely taken aback by how well it has gone’

The couple, pictured outside their home, still enjoy their own space and have separate beds as they are so used to having a bed to themselves

The pair, pictured outside their new home, are enjoying seeing a lot more of each other and say it’s like a ‘totally new relationship’

‘I feel a lot more laid back living in Weatherby with David and Jay, it’s a slower pace and more peaceful way of life.

‘If we had moved in together in Bradford, I don’t think it would have worked as well because of lots of external pressures.

‘We don’t regret not doing it sooner because now was just the right time. Everything has fallen in to place perfectly.’

While the pair have finally moved in together, they enjoy their own space and have separate beds as they are so used to having a bed to themselves.

However, they are enjoying seeing a lot more of each other.

Clair said: ‘It feels like a totally new relationship. It’s weird waking up in the morning and seeing him first thing, and saying goodnight to him as I go up to bed.

‘It’s lovely to come down to the kitchen in the morning and David’s got the kettle on and the music playing, dancing with Jay.

‘I’ve not had this for 20 years, so it is so nice to experience it now.

‘We had never even thought of a future where we were living under one roof, but it has been amazing. We are so happy and I can’t see any reason why we won’t be living together forever now.’