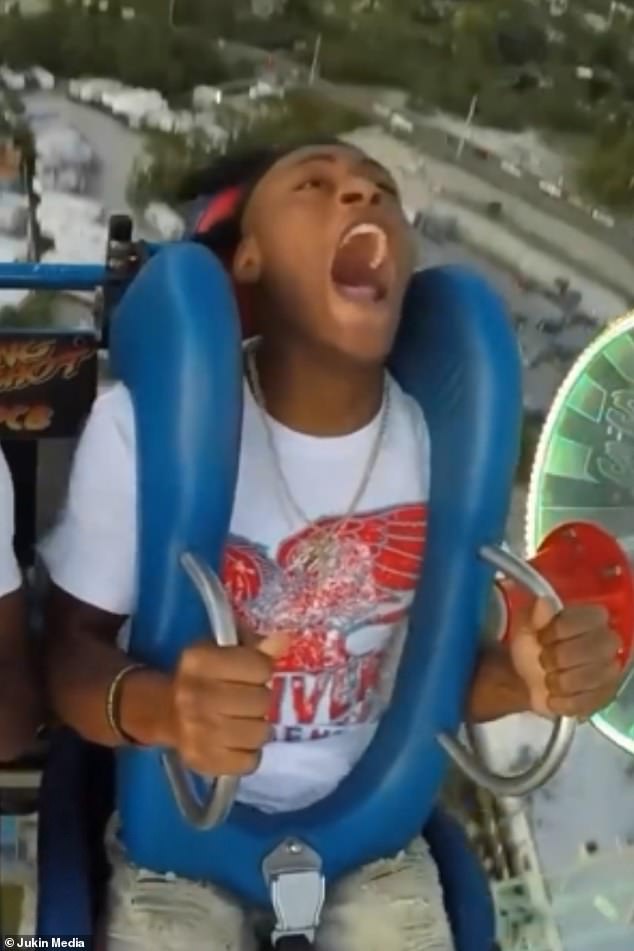 This is the moment a thrill-seeker fainted on an amusement park ride when he was sent shooting into the air at 70mph.

The unidentified man was trying out the Panama City Beach Slingshot in Florida when it all became a bit too much for him.

His reaction was caught on the ride’s camera and shared on TikTok on March 6.

The man, who has not been identified, decided to take on the Panama City Beach Slingshot in Florida, with video of the encounter released on March 6

However, after screaming for the first few seconds it all becomes a bit too much and he passes out

The video starts with man staring nervously into the air, before the slingshot is suddenly released.

He begins to scream, along with his companion off camera.

But as the ride reaches its highest point he stops screaming, his eyes fall shut and his body goes limp.

While his companion keeps screaming, the man unconscious man is a picture of calm.

He spends the next 30 seconds sitting limp on the ride – at one point it looks like his necklace is about to fall off – before suddenly jerking awake and looking very confused.

His first words back are ‘oh s**t’ before his oblivious friend asks him what happened.

The man takes it all in his stride, laughing to his companion and shouting down to people watching from below.

At one point he almost loses his necklace. Next to him, his friend continues to scream, seemingly unaware the person next to him has fainted

The man woke up with a jolt, looking confused about what just happened to him, while his friend asked him what happened

He seemed to enjoy it in the end though, excitedly shouting to friends standing on the ground

The slingshot, which is also known as The Vomatron, is 200 feet tall and is powered by six giant electric motors.

On its website, the theme park says it is similar to how NASA trains astronauts for space flight as it travels at up to 70mph, while the capsules riders sit in spins, putting them under forces of up to 4Gs.

It then spins in the opposite direction at the same speed and intensity, something that can cause some people to black out due to a lack of blood flow to the brain.

This is the result of a sudden decrease in blood pressure and heart rate that comes with this the combined rotation and speed.

It is not dangerous, with many people passing out for mere seconds and waking back up before the ride has finished.

One poor teenager in Mexico City lost consciousness four times on just one ride, but that didn’t stop him enjoying himself.

Daniel Barron Melendez, who was 15 at the time, passed out multiple times while on the Sling Shot ride with a friend at Six Flags Mexico in 2016.

Footage shows his eyes glazing over and rolling back at times during the ride, but he comes to before it ends, even managing to make a peace sign to the camera.

He later shared the video on Facebook, with the caption: ‘I really had fun Yohana Medellin’.