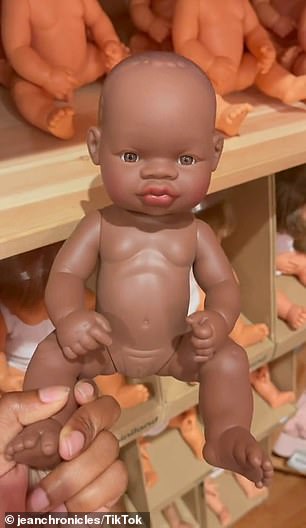 An Australian mother has criticised a toy company for ‘exaggerating’ facial features on its black dolls but not on its ‘white’ ones, before praising Kmart for its diversity range.

Jean, who blogs under @Jeanchronicles on TikTok, shared a video of ‘anatomically correct’ Miniland Dolls she found in a toy shop that had the offending larger lips, a larger nose and longer forehead on its darker dolls.

‘This is what buying black dolls in Australia is like,’ she captioned the post, which has 3,000 comments on it at the time of writing.

‘Okay but for the lips they really went all out,’ one woman commented.

Jean, who blogs under @Jeanchronicles on TikTok, shared a video of ‘anatomically correct’ Miniland Dolls she found in a toy shop that had the offending larger lips, a larger nose and longer forehead on its darker dolls

‘I mean it’s sort of accurate for a teen or an adult to have these features but not proportional whatsoever for a baby,’ said another.

A third added: ‘While I don’t necessarily agree with the doll some people do have features like that and I’d buy it just to celebrate diversity’.

Many told Jean to try and buy a doll from Kmart, which also offers a diverse range of dolls to its customers.

‘So I went to Kmart and found some really cute black dolls. It’s not just about representation it’s equally important how we are presented,’ Jean said.

‘These are much more realistic than the last ones,’ replied one woman.

Many told Jean to try and buy a doll from Kmart, which also offers a diverse range of dolls to its customers

The Kindred Folk dolls are $16 each and have their own names, like Ollie and Ruby.

Previously, thousands defended Kmart’s decision to sell dolls with Down Syndrome – and label them as such – after a video surfaced online of the toy name, which was different to other options in the ‘soft cuddle baby’ range.

The video captioned ‘Kmart Australia has no chill’ pans across the shelves in the toy section showing two ‘soft cuddle baby’ dolls at Kmart before landing on the ‘baby Charlie with Down Syndrome’ doll.

Since being posted the clip has racked up a staggering 6.1million views and thousands of comments from Australians praising the retailer’s inclusivity.

‘It teaches kids acceptance. What is so wrong about it?’ one woman wrote.

‘I have a son with DS, they happen to love these dolls,’ another said.

‘I think its great for kids who have Down Syndrome, they would love these dolls. It’s about time they make all kinds of dolls for all types of children,’ commented a third.

‘How is this no chill? Children with downs can have a doll that resembles them so they feel included,’ another responded.

It is unclear whether the original poster was mocking the dolls but, in the comments, said the video was not ‘meant to offend anyone’ and they are ‘not against disabled people’.

Some questioned whether the poster was referring to the wording difference between the dolls.

‘I think they mean the name has no chill. It says ‘soft cuddly baby’ and then the last one just says ‘baby Charlie with Down Syndrome’,’ said one user.

‘Pretty sure the wording could’ve been different compared to the other two. That’s where they went wrong,’ wrote a second.

A few weeks ago Kmart promoted their range of diverse dolls and toys on their Instagram page to celebrate International Day of People with Disability.

The inclusive range includes a boy doll Charlie and a girl doll Amelia with Down Syndrome as well as Barbie-like figures with a hearing aid, wheelchair, crutches, visual impairment and a prosthetic leg.

Shoppers have applauded the range online saying their children love playing with the toys.