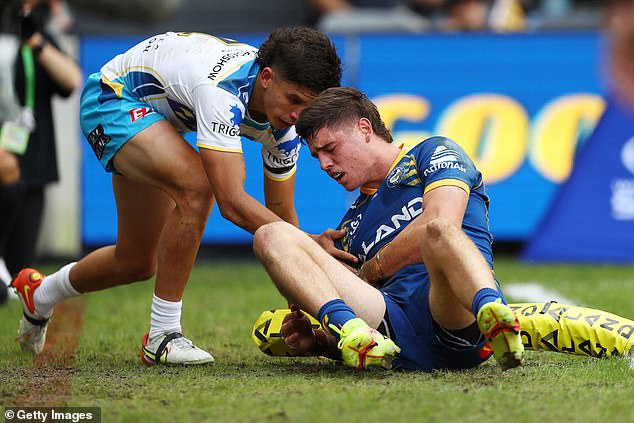 Parramatta Eels winger Sean Russell will be out indefinitely after a crunching tackle from Jayden Campbell left him with fractured ribs and a punctured lung.

Russell scored a hat-trick as the Eels defeated the Gold Coast Titans 32-28 on Sunday, but his scoring exploit came at a significant cost as he had to leave the field after registering his third try with just seven minutes left in the first half.

The 19-year-old was about to touch down for a score when Campbell attempted a desperate a tackle and slid in knees-first, smashing into Russell’s ribs.

The Titans fullback escaped punishment on the pitch and was not charged by the match review committee on Monday, despite the fact he looked to be leading into the tackle with his knees.

Russell spent a night in hospital, but despite the severity of the injury Eels captain Clinton Gutherson played down the incident.

‘It was just in the moment of trying to stop a try, trying to score one and hopefully Seany’s alright and we can get him back playing,’ he told Fox Sports.

Parramatta coach Brad Arthur was similarly magnanimous about it.

‘I didn’t see it closely enough so I don’t want to make a comment on something I haven’t seen,’ he added. ‘I didn’t think there was any intention in it, so we’ll just wait and see how Seany is.’

The Eels said in a statement on Monday that they will evaluate Russell over the coming weeks and will provide an update when his prognosis is clearer.

Russell’s absence is the latest blow to Parramatta, whose options on the wings have been decimated by long-term injuries to Haze Dunster and Maika Sivo.

The former will miss the whole of the 2022 season after rupturing his ACL and MCL during a trial game against the Dragons, while the latter ruptured his ACL in August.