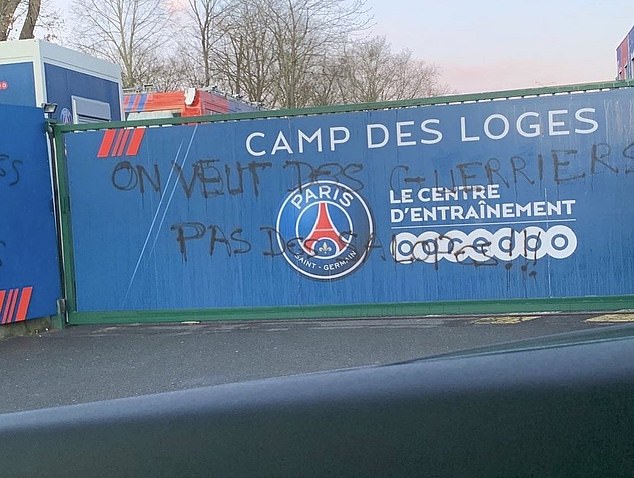 Paris Saint-Germain fans have graffitied the club’s training centre as frustration over their Champions League exit continues to boil over.

Since their embarrassing collapse against Real Madrid last week, supporters have turned against a number of their top stars, including Lionel Messi.

The Argentine superstar was booed during their 3-0 victory over Bordeaux on Sunday, while Neymar was also targeted with whistles after he scored during the match.

Fans have also called for the club’s president Nasser Al-Khelaifi, as well as sporting director Leonardo, to resign from their positions after the side’s latest elimination from the Champions League.

They have now targeted the club’s training centre with angry messages, among which tell Messi and Al-Khelaifi to leave the club.

One tag said: ‘Nasser, Leo out,’ while another said there had been ’10 years of mediocrity’ under Qatar Sports Investment – led by Al-Khelaifi.

The tags also hit out at the club’s Qatari owners, saying there had been ’10 years of mediocrity’

Messi was the main target of insults in the messages sprayed on the training centre, which were spread over 40 metres around the building.

Other messages included: ‘We want warriors not s***s’, ‘Leonardo get out’, ‘be worthy’, ‘you make us ashamed’, ‘Paris will never be Qatari’, and ‘Paris is us’.

The graffiti was sprayed overnight but had been cleaned up by Monday morning.

Messi and Neymar weren’t the only players to be jeered during their Ligue 1 clash with Bordeaux.

Former Liverpool star Georginio Wijnaldum – despite not playing against Madrid last week – was another to be on the receiving end of frustration from PSG supporters.

Banners were pictured in the stands calling for sporting director Leonardo to leave the club.

One banner calling for a resignation read ‘Direction demission’.

Another banner said: ‘Mbappe A Paris, Leonardo Au Pilori,’ urging the striker to stay at the club, while insisting Leonardo should be in a pillory.

PSG ultras have also wrote an open letter calling for Al-Khelaifi to resign.

‘The unacceptable and inevitable disappointment that we feared and foresaw has unfortunately come to pass,’ the Collectif Ultras Paris group wrote, as quoted by Goal.

‘How can you have the mindset to move mountains when your season seems to begin in February and you play domestic competitions at a pedestrian pace?

‘How can you have a genuine game plan when your squad is nothing but a bunch of “stars” who barely complement one another?

‘How can a coach be the respected leader of the changing room when he is clearly not the true decision maker?

‘How can you rebuild a squad when eternal substitutes can happily see out their contracts with such comfortable salaries?’

The ultras have acknowledged that Al-Khelaifi deserves credit, having overseen PSG’s dominance of French football in recent years, which has seen the side win seven Ligue 1 titles since he began his role in 2011.

However, they no longer feel that he is the man to take the club forward.

‘We don’t have a short memory. We know what our return owes to president Nasser Al-Khelaifi but it is clear he is not the man for the job.

‘The club’s current situation requires complete reorganisation at all levels going forward and the daily presence of its president,’ the statement added.

The pressure appears to be building on Al-Khelaifi, just days after he reportedly threatened a Real Madrid employee and entered the referee’s changing room following PSG’s dramatic European exit.

UEFA have opened disciplinary proceedings against him as they investigate whether he needs to be punished for his actions.

Atletico Madrid striker Suarez took to Instagram during PSG’s game against Bordeaux with a message of support for his former team-mates Messi and Neymar.

He tagged the duo and put: ‘As always #footballwithoutmemory, always with you. Love you both so much.’