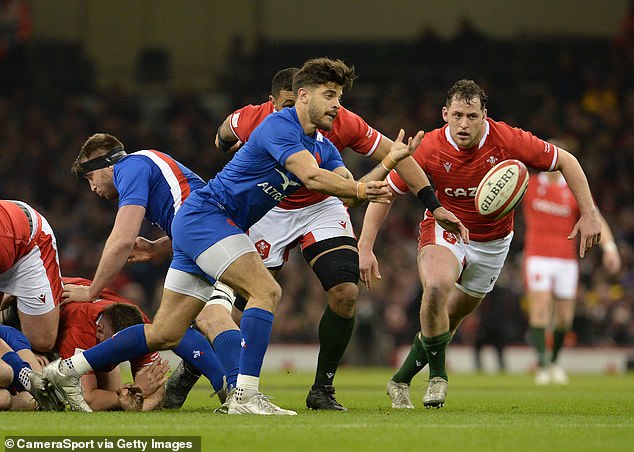 CHRIS FOY’S SIX NATIONS WEEKEND VERDICT: Friday fixtures are falling short at the expense of the paying spectator, Scotland will have mixed feelings with their mid-table status confirmed, and Italy offer nothing after their 36th defeat in a row

The Six Nations action has showed that Friday fixtures don’t work for spectators, Italy are just a bye for other teams and Wales have a shrewd defence.

Scotland, meanwhile, will have mixed feelings about their fortunes, while a steward was forced to stop a pitch invader at Twickenham in England’s defeat to Ireland.

As the tournament slowly comes to a close, Sportsmail’s CHRIS FOY is on hand to deliver his verdict for all of the weekend’s drama…

It has been another unfulfilling tournament for Gregor Townsend’s Scotland side, meanwhile

Friday night fixtures don’t work for the paying spectator — proved again by the sight of 11,000 empty seats at the Principality Stadium, for the visit of France.

There are particular logistical issues in Cardiff such as limited hotel and match-day train capacity, but also visiting fans face more of a challenge to travel in numbers, which is part of the tournament’s appeal. Three fixtures on each Saturday, please.

Scotland produced some razzle-dazzle rugby in Rome, but it all felt so hollow after defeats by Wales and France re-confirmed their mid-table status.

Ali Price was electric in his 50th Test, Finn Russell threw Finn Russell passes and there were a couple of stunning, end-to-end tries, but it’s been another unfulfilling tournament for Gregor Townsend’s side, with more trouble ahead in Dublin.

Scotland produced some razzle-dazzle rugby in Rome, but it all felt so hollow after two losses

Give that steward a raise…

There was a serial pitch invader at Twickenham and it was good to see him being swiftly dealt with this time.

Questions have to be asked about how the same man — who has also targeted Lord’s and the Tottenham Hotspur Stadium — can keep breaching security around the perimeter of stands, and how he was able to join the England line-up for the anthem.

At least he was promptly flattened by a steward.

Wales were super-smart against France, reducing their opponents to a state of stuttering anxiety. Their kicking was clever and accurate.

That’s now 36 defeats in a row for Italy. Sorry, it’s a broken record, but it’s also a broken format if they only serve as a bye for every other team in the tournament.

They will lose in Cardiff next weekend to complete a seventh consecutive winless campaign, against the backdrop of South Africa’s determination to gain entry.

CVC will be losing patience…

There were wonderful, emotional scenes in Madrid as Spain beat Portugal in front of a sell-out crowd to clinch their place at the 2023 World Cup.

They haven’t taken part in the global showpiece since 1999 and their re-emergence is a welcome development for the sport. World Rugby should make supporting the Spaniards a strategic priority in the coming years.

Team of the weekend