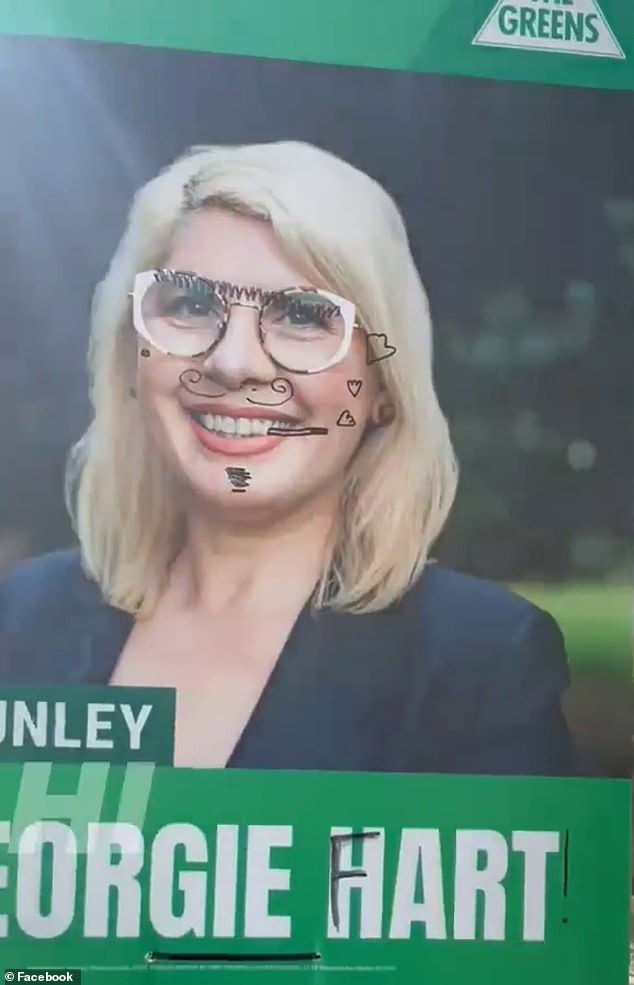 A cheeky politician has responded to ‘bullies who vandalised her election poster by recreating the artistic impression of her.

Georgie Hart, the Greens candidate for the South Australian seat of Unley, found a graffitied campaign poster of hers on Sunday.

The ‘artist’ gave Ms Hart a moustache, goatee and monobrow. They added a cigarette out of her mouth and changed her last name to ‘Fart’.

And while the childish vandalism may have upset some, Ms Hart decided to have some fun with it by emulating the look.

Scroll down for the video

She drew a moustage, monobrow and cigarette on her face before taking to Instagram to address her followers.

‘Hi I’m Georgie Fart and I’m here to talk to you about natural gas,’ she joked.

Ms Hart then explained how natural gas and natural coal are harming the planet and urged voters to vote for the Greens in the next election.

She added that coal seam gas ‘stinks’ and that further investment in the fossil fuel industry would leave ‘our children’s future and flush them down the dunny’.

In her video, Ms Hart added that coal seam gas ‘stinks’ and that further investment in the fossil fuel industry would leave ‘our children’s future and flush them down the dunny’

Commenters loved the funny video as well as the information in it.

‘Humorous and informative- love it!,’ one commenter wrote.

‘This is brilliant. Thanks for having a sense of humour while also championing these important issues,’ another said.

Another said it was a great way to respond to bullies.

Another one of Ms Hart’s election posters was vandalised with a ‘white workers’ sticker.

Journalist Miles Kemp said the sticker was the work of ‘conservative haters’ looking for a ‘new easier target’.

The seat for Unley has been held by David Pisoni for the Liberal Party since 2006.

Council elections for Unley will be held on November 10.