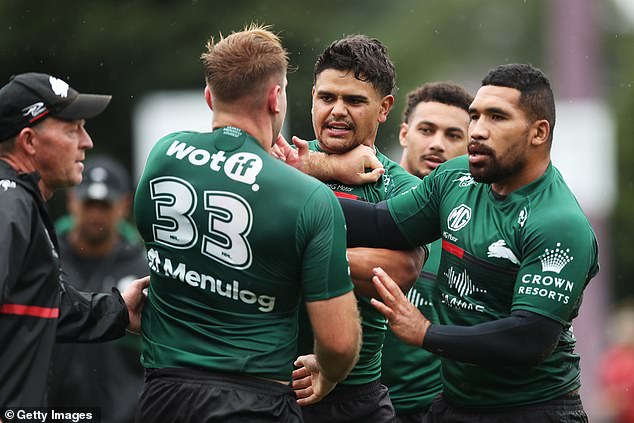 South Sydney Rabbitohs forward Jacob Host insists he and Latrell Mitchell have buried the hatchet after a well-publicised training ground incident and are both focused on taking on the Melbourne Storm.

The pair made headlines last week, when a scuffle broke out as tempers flared during a training session at Redfern Oval.

Host, however, played down the flashpoint and insisted there was no trouble between him and his teammate.

‘You missed the real fight in the sheds afterwards,’ he jokingly told the media on Monday morning.

We had round two. After it all happened, I saw the cameras in the grandstands and thought this could be something.

‘I didn’t realise it would be on every news outlet, I had mates send me clips from the radio. It’s the most attention I’ve ever had.’

Pictures of him and Mitchell pushing and shoving may have told a different story, but the Rabbitohs lock said the incident was blown out of proportion.

Teammates had to intervene to separate the two as tempers flared

‘Straight after it happened we were hugging each other. I’m surprised there were no photos of that,’ he continued.

‘We had to defuse the situation ourselves on social media to let everyone know we’re sweet. […] We play a contact sport. Sometimes you get heated in different ways. I’ve got a bit of a hothead […] Latrell is also a passionate person and player and emotions get the best of us.’

Souths coach Jason Demetriou said the fracas ‘doesn’t bother me at all’ and  welcomed it as a sign his team was pumped and ready to go against Brisbane in the opening round of the NRL season.

The Bunnies, however, got their campaign off to an inauspicious start, losing 11-4 at Suncorp Stadium against the Broncos and a trip to Melbourne to face the Storm is up next in Round 2.

Mitchell is set to make his return at AAMI Park on Thursday night and Host believes his teammate can be a difference-maker.

‘I know Latrell is ready to rip in and he’s very keen to be back, and we’re very keen to have him there,’ he said.

He’ll be a big part of our season this year. I’ve never seen him work harder or be more focused than I have seen him this pre-season. We’re in for a big season with Latrell.’