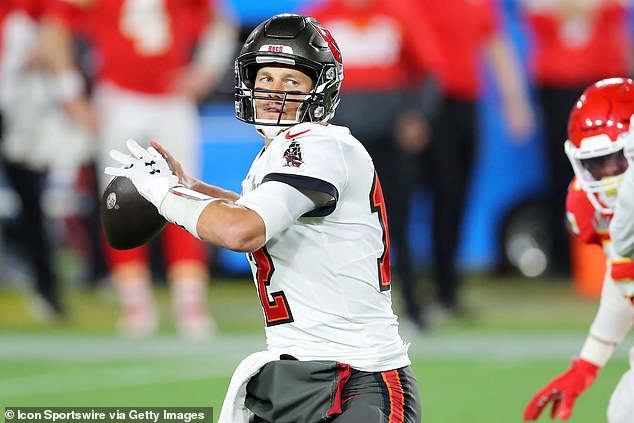 The buyer who paid $518,000 for Tom Brady’s final touchdown pass football – only for the quarterback to come out of retirement hours later – will likely have to pay the full price.

Analysts told DailyMail.com that the listing was ‘100 per cent true and accurate at the time of sale’, which was finalized less than 24 hours before Brady’s shock announcement.

The identity of the buyer and seller have not been disclosed by auctioneers Lelands.

But were the football to go on sale now it would be worth only around $20,000, just four per cent of the amount that the buyer paid, Bradley Calleja, an appraiser at Altan Insights told DailyMail.com.

Brady threw the football on January 23 during the Buccaneers’ home playoff loss to the Los Angeles Rams at Raymond James Stadium in Tampa, Florida.

The legendary quarterback’s ‘last football’ was auctioned off for $518,628 with taxes and fees just a day before he announced his return

The quarterback completed a 55-yard touchdown pass with wide receiver Mike Evans, who threw it into the stands where it was caught by a fan who put it up for auction.

A week later Brady said he was retiring after 22 seasons in the NFL during which he became arguably the greatest quarterback of all time.

At 7:13pm on Sunday night – 21 hours later – Brady sent his tweet saying that ‘I’ve realized my place is still on the field and not in the stands’.

He said he was returning to Tampa for one more season, adding he had ‘unfinished business’ to attend to.

Calleja, who specializes in sports memorabilia, said: ‘Looking at the terms and conditions of auctions with Lelands, typically the buyer would have to pay.

‘At the end of the day it wasn’t falsely advertised, it was his final pass and it still is. At the time of sale it was accurate.

‘Hopefully it doesn’t end up in the courts. There isn’t any clause along the lines of ‘if things change within 24 hours.’

‘I’ve never seen anything this extreme. I’ve seen cards turn out to be fake, or a jersey turns out not to have been worn at a specific event.

‘It’s still valuable but you’re talking $20,000 instead of half million, that’s about as drastic a change as you could get.’

Brady threw the football on January 23 during the Buccaneers’ home playoff loss to the Los Angeles Rams at Raymond James Stadium in Tampa, Florida

Calleja said it would be ‘tough’ for both the buyer and the seller as ‘no matter what, somebody will lose out.’

‘If somebody is able to pay half million for a football you’d hope they have money to spend, but you hope Lelands could work something out with the buyer, maybe a credit on their site.’

The decision by Brady to return to the Bucs after just six weeks in ‘retirement’ has left the lot description of the football looking grimly ironic.

It reads: ‘If there is any item in the field of sports collectibles that needs no embellishment, it is this historic piece: the final touchdown ball of Tom Brady’s career.’

The text adds that ‘one thing is certain: the opportunity to obtain a piece of football history of this magnitude may never present itself again.’

Analysts told DailyMail.com that the listing was ‘100 per cent true and accurate at the time of sale’, which was finalized less than 24 hours before Brady’s shock announcement

The terms and conditions on the website for Lelands, which is based in Matawan, New Jersey, state that payment must be made for items within 14 days.

Failure to pay within 30 days will result in Lelands charging any balance to the buyer’s credit card and / or reselling the item.

Buyers agree to pay all of Lelands costs, including attorneys fees and any fees incurred collecting payment from the seller, the website states.

Calleja said that if the matter did end up in the courts, he didn’t see that the buyer had much of an argument.

He said: ‘The description was 100 per cent true and accurate at the time of sale and it still is, it’s still accurate. He hasn’t thrown another touchdown yet.

‘It is the correct ball, it is photo matched by another company.

‘It was interesting to watch the sale. When I saw the bidding coming through, I thought $500,000 ended up being a really good price. I wondered if there were some big bidders holding back, thinking Brady could return to the game.

‘I will be interested to see what the price of Brady’s next ‘final touchdown’ ball will be.’

Calleja said that Brady himself could get involved to resolve the matter as he did to get back the ball he threw for his 600th NFL touchdown last year that was caught by a fan.

Brady has said that after ‘a lot of negotiations’ he gave the fan one Bitcoin – currently worth $37,000 – two signed Brady jerseys, a signed Brady helmet and a $1,000 credit at the fan store, as well as two season tickets for the 2022 season.

The champion quarterback announced the shock decision on Twitter on Sunday saying: ‘These past two months I’ve realized my place is still on the field and not in the stands.

‘That time will come. But it’s not now. I love my teammates, and I love my supportive family. They make it all possible. I’m coming back for my 23rd season in Tampa. Unfinished business LFG.’

The iconic quarterback, 44, brought the curtain down on a glittering 22-year career when he announced his retirement on February 1.

Brady announced his decision to retire last month, citing the desire to spend more time with his wife, supermodel Gisele Bundchen, and three children. Brady posted the above photo to Instagram on Sunday when he announced his return to the game

The quarterback stunned the world on Sunday when he confirmed he would be re-joining the Buccaneers for another campaign after 40 days in retirement.

However, his decision may not be that surprising considering just a week into his ‘retirement,’ Brady said ‘never say never’ about playing again.

He made the comeback announcement hours after sharing a photo of himself visiting Manchester United’s Old Trafford training ground in England, and meeting with the British team’s iconic striker Cristiano Ronaldo, himself a veteran sportsman widely-regarded as still being at the top of his game.

Brady announced his decision to return to the Bucs one day before the NFL free agency period begins.